NASA is offering to buy lunar samples collected by companies for a token sum primarily to set a precedent for space resource rights on the moon.
SpaceNews 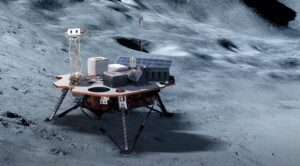 WASHINGTON — NASA is offering to buy lunar samples collected by companies for a token sum primarily to set a precedent for space resource rights on the moon.

In a solicitation issued Sept. 10, NASA requested quotations from companies willing to go to the moon and sell between 50 and 500 grams of lunar rocks or regolith. Once the company collected the sample and provided evidence of doing so, NASA would take ownership of the sample and pay the company. The company would not have to return the sample to Earth, instead letting NASA collect it on a future mission.

The primary purpose of the transaction is to set a precedent for the extraction and transfer of lunar resources, rather than to actually obtain the samples for scientific or other use. “We’re going to buy some lunar soil for the purpose of demonstrating that it can be done,” NASA Administrator Jim Bridenstine said in remarks Sept. 10 at the Secure World Foundation’s Summit for Space Sustainability.

While the request for quotations did not specify a price NASA would pay for the samples, Bridenstine said the agency was willing to pay $15,000 to $25,000 for the samples. In a panel discussion later in the conference, Mike Gold, acting associate administrator for international and interagency relations, estimated the total amount available under the program at $50,000. Those figures are a tiny fraction of the cost to go to the moon and scoop up lunar material.

“What we’re trying to do is make sure that there is a norm of behavior that says that resources can be extracted and that we’re doing it in a way that is in compliance with the Outer Space Treaty,” Bridenstine said.

That builds upon both national law and policy. The Commercial Space Launch Competitiveness Act of 2015 gave companies rights to resources they extracted from the moon or other celestial bodies. An executive order in April directed agencies to seek international support for that position, and the Artemis Accords, announced by NASA in May, included as one of its principles the ability to extract and use lunar resources.

The ability to use lunar resources is critical to the long-term sustainability of the overall Artemis lunar exploration program, he argued. “We can’t go sustainably to the moon unless we’re utilizing the resources of the moon,” he said.

There is not, however, international consensus on the U.S. position on the rights to extracted resources. Luxembourg and the United Arab Emirates have enacted legislation modeled on the 2015 U.S. law on the issue, but others see such laws as contrary at least to the intent of the Outer Space Treaty.

“In the end, we will need multilateral discussions,” said Tanja Masson-Zwaan, assistant professor and deputy director of the International Institute of Air and Space Law at Leiden University, during the panel discussion at the conference. “I can only hope this will help create more leverage at the U.N. level.”

Space resources was to be a topic of discussion at this year’s meetings of the U.N.’s Committee on the Peaceful Uses of Outer Space (COPUOS), but those meetings were canceled because of the pandemic. “The next step must be that the multilateral discussions continue,” she said.

Both Bridenstine and Gold said they have had discussions with international partners about the Artemis Accords in general, and the use of space resources in general. “We’ve received excellent feedback from our partner nations” on the accords, Gold said.

He agreed that issues of space resources should be discussed at COPUOS, but that NASA’s plans to use lunar resources shouldn’t wait for them. “These are ultimately issues that we look forward to hopefully resolving in a multilateral manner, but the important thing is that we have the discussion, and that we have discussion now,” he said. “That’s what the Artemis Accords and many of our other activities are meant to do.”

NASA’s announcement won broad support from the commercial space industry and related organizations, who see it as a step toward supporting the development of a space resources market and addressing the policy issues that creates. “This accelerates the conversation about something that is necessary for sustained human presence,” said Jessy Kate Schingler, director of policy and governance research for the Open Lunar Foundation, during the panel.

“I think what we’re seeing here is a first move, and I really hope to see the international community respond,” she added.