NASA completed what appeared to be a successful static-fire test of the core stage of the Space Launch System March 18, two months after a similar test was cut short by technical problems.
SpaceNews 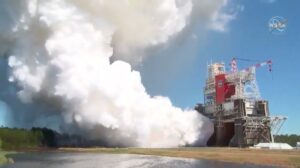 WASHINGTON — NASA completed what appeared to be a successful static-fire test of the core stage of the Space Launch System March 18, two months after a similar test was cut short by technical problems.

The SLS core stage, mounted on a test stand at the Stennis Space Center, ignited its four RS-25 engines at 4:37 p.m. Eastern. The engines fired for approximately 8 minutes and 20 seconds before performing a controlled shutdown, as expected. That was followed by applause in the control room.

In the moments after the test, agency officials appeared pleased. “They clearly got the full duration that they were after, which is great news,” Bill Wrobel, Green Run manager at NASA Headquarters, said on NASA TV. “It looks pretty good right now.”

The test ran the full planned duration of the burn, the same as on a launch of the SLS. NASA officials said before this test that they needed the burn to last about four minutes to collect the data they needed to meet all the test milestones, but that they would continue beyond that point to a full-duration burn if it was going well.

“Clearly there’s a lot of data that’s now going to have to be analyzed, the engineers have to see what worked and what didn’t, or what needs to be tweaked and what doesn’t,” Wrobel said. “The applause says a lot about how the team feels.”

The mood was different from the first Green Run static-fire test Jan. 16, when the engines shut down after just 67 seconds. Engineers determined that the hydraulic system in one engine hit “intentionally conservative” limits in flight software, triggering the shutdown. NASA decided later in January to perform a second static-fire test to collect data not obtained in the first test.

If the test was indeed successful, NASA will move ahead with preparing the core stage to ship to the Kennedy Space Center, a process that will take about a month. Once at KSC, workers will integrate the core stage with its two five-segment solid rocket boosters, upper stage and Orion spacecraft for the Artemis 1 uncrewed mission.

NASA had been planning that launch for November, but in a March 17 interview, NASA Acting Administrator Steve Jurczyk acknowledged that technical problems, as well as delays caused by the pandemic and tropical weather last year, had consumed most of the margin in the schedule for a November launch.

NASA will evaluate that schedule in the next few weeks, he said, and either stick with the November date or push the launch back. “I think in a few weeks we’ll know if November is possible or we need to push it out maybe a month or two,” he said.