NASA has delayed moving a proposed mission to search for near Earth objects into its next phase of development because of uncertainty about the budget that will be available for it.
SpaceNews 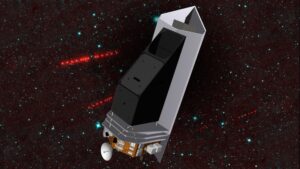 WASHINGTON — NASA has delayed moving a proposed mission to search for near Earth objects into its next phase of development because of uncertainty about the budget that will be available for it.

NASA had planned to conduct a review known as Key Decision Point (KDP) B this month of the Near Earth Object (NEO) Surveyor spacecraft, a space-based infrared telescope that would search for near Earth asteroids. Competing that review would allow the mission to move into Phase B, supporting preliminary design work and completion of key technologies needed for it.

However, agency spokesman Grey Hautaluoma confirmed to SpaceNews that the KDP-B review has been postponed until the spring of 2021. “The decision to delay the start of the next phase of this important mission is based on factors external to the NEO Surveyor project team,” he said in a Dec. 14 statement. “Specifically, NASA needs more time to assess COVID-19 impacts to the overall Planetary Science Division budget and assess appropriate life cycle costs for this mission to support decisions at KDP-B, as NEO Surveyor formulation activities continue.”

The delay took many in the planetary science community by surprise. At a Nov. 30 meeting of NASA’s Planetary Science Advisory Committee, agency officials said a review by a NASA program management council was scheduled for the week of Dec. 7 to allow the mission to go into Phase B.

However, they also acknowledged the mission was facing budget pressure. “There are some substantial funding challenges in the current budget that we have,” said Lori Glaze, director of NASA’s planetary science division, at the committee meeting. “We are still, even with that, moving forward with NEO Surveyor into its implementation, move into Phase B.” That transition to Phase B would take place “relatively soon,” she added.

“The decision for it to enter Phase B, Key Decision Point B, was postponed until some time next spring due to the uncertainty about the budget for the project,” he said. “Currently, the planetary defense program does not have in its budget line, through the next five years, sufficient funding to accomplish this mission yet.”

He added uncertainty in the broader planetary science budget because of COVID-19 impacts on various projects, as well as a transition of presidential administrations, also contributed in the decision to delay KDP-B. NASA’s Science Mission Directorate, he said, “decided to postpone this entry into Phase B until that budget picture ahead became a little clearer.”

NASA, in its fiscal year 2021 budget request in February, sought $150 million for its planetary defense program. That included funding for one mission, the Double Asteroid Redirection Test (DART), scheduled for launch in July 2021, along with other support for near Earth object observations, including the NEO Surveyor spacecraft.

The five-year budget projection for the planetary defense program, though, projected a decline in spending to $98 million a year by fiscal year 2023, remaining at that level through 2025. NASA, like other federal agencies, has been working with the White House’s Office of Management and Budget on its fiscal year 2022 budget proposal, which includes projections through fiscal year 2026. Those proposals will be revisited and revised by the new Biden administration, delaying their release likely until the spring.

Johnson emphasized that work on NEO Surveyor has been going well. It completed both a system requirements review and mission design review, and got what he called “high marks” in a technical assessment from a standing review board.

NASA announced in September 2019 it would pursue NEO Surveyor, also known as the NEO Surveillance Mission (NEOSM), as a directed mission within NASA’s planetary defense program. It is the successor to NEOCam, a finalist in the previous round of NASA’s Discovery program of planetary science missions.

While NASA did not select NEOCam for development in the Discovery program, it did provide “extended Phase A” funding to mature the technologies for its infrared instrument. NASA projected last year that the mission would cost between $500 million and $600 million, with a launch in the mid-2020s.

NASA justified proceeding with NEOSM as a directed mission, rather that have it again compete in the Discovery program, because its goals are not purely scientific. The spacecraft is designed to allow NASA to meet a congressionally mandated goal of discovering at least 90% of near Earth objects at least 140 meters across.

Congress, in a 2005 NASA authorization act, directed NASA to meet that goal by 2020, but ground-based surveys have fallen short. Johnson said that of the estimated population of 25,000 near Earth objects at least 140 meters across, astronomers have discovered only about 9,500 of them.

At the current rate of discovery, “it’s going to be several more decades” to meet that goal, he said. “An enhanced capability, like NEOSM, is what we need to really achieve this goal that Congress gave us some 15 years ago.”