Just days after NASA said it was ready to perform a second static-fire test of the Space Launch System core stage, the agency announced Feb. 22 that the test would be delayed because of a valve problem.
SpaceNews 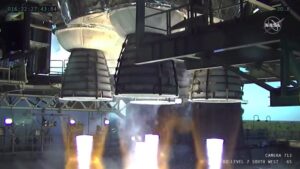 WASHINGTON — Just days after NASA said it was ready to perform a second static-fire test of the Space Launch System core stage, the agency announced Feb. 22 that the test would be delayed because of a valve problem.

NASA said it was postponing the Green Run static-fire test, which had been scheduled for Feb. 25, after discovering a problem with one of eight valves called “prevalves” associated with the stage’s four RS-25 main engines. The valve, which supplies liquid oxygen, was “not working properly,” NASA said in a statement, but didn’t elaborate on the problem.

Engineers identified the problem during preparations over the weekend for the test. NASA said it will work with Boeing, the prime contractor for the core stage, to “identify a path forward in the days ahead and reschedule the hot fire test” but did not set a new date for the test.

This is not the first time a problem with valves delayed Green Run testing of the core stage. In November, NASA reported a problem with a liquid hydrogen prevalve on the core stage, which required workers to design a special tool to repair the valve on the test stand. That, along with the effects of a tropical storm that passed by the Stennis Space Center in late October, delayed by several weeks the stage’s wet dress rehearsal, where the stage is loaded with propellant and goes through a practice countdown.

The announcement of the latest delay came just three days after NASA and industry officials held a briefing where they expressed confidence that they were ready to perform the static-fire test on Feb. 25. That included overcoming issues associated with recent winter storms and unseasonably cold weather at the Mississippi test site.

“The team has been working very hard around some difficult situations. We’re on a pretty good track to make the 25th,” said John Shannon, vice president and SLS program manager at Boeing, during the briefing.

At the same briefing NASA officials said that they remained cautiously optimistic that SLS could make its first launch on the Artemis 1 mission, an uncrewed test flight of the Orion spacecraft, before the end of the year despite lengthy delays in the Green Run test campaign. Tom Whitmeyer, deputy associate administrator for exploration systems development at NASA Headquarters, said that the mission could launch as soon as October if everything went well, then admitted that it was likely there would be problems along the way.

“First of all, we really need to get this hotfire behind us,” he said, referring to the Green Run static-fire test. “That’s the most important thing we have in front of us.”