NASA’s Mars 2020 rover is on track for a landing next month that will begin in earnest an effort to return samples of the planet to Earth.
SpaceNews 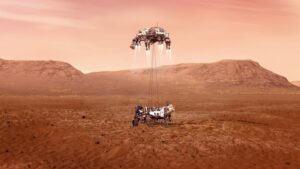 WASHINGTON — NASA’s Mars 2020 rover is on track for a landing next month that will begin in earnest an effort to return samples of the planet to Earth.

The spacecraft, launched July 30, is scheduled to land in Jezero Crater at 3:55 p.m. Eastern Feb. 18. It will place on the surface the Perseverance rover, a vehicle similar to the Curiosity rover that landed in 2012 but with a different suite of instruments and other enhancements.

EDL refers to entry, descent and landing, known as the “seven minutes of terror” as the spacecraft enters the Martian atmosphere and slows down to enable a safe landing of the rover. That process is similar to what Curiosity used, but with some improvements.

One of those is the “range trigger,” said Allen Chen, the Mars 2020 EDL lead, during a Jan. 27 press briefing. “With range trigger, we’ve given Perseverance the ability to decide for herself when to deploy the parachute based on where she is,” he said, enabling a more precise landing.

The second is terrain relative navigation, giving the lander “eyes and a map,” he said. The spacecraft will use cameras to take images of the terrain as it descends and compare them to an onboard map. “Once she’s figured out where she is, she can fly to a safe spot nearby,” he said, further enhancing the precision of the landing.

Both technologies are essential, Chen said, for the mission to go to Jezero Crater. “When I look at it from a landing perspective, I see danger,” he said, such as steep cliffs, sand, boulders and impact craters. “If it wasn’t for range trigger and terrain relative navigation, we just could not go to Jezero.”

That location is enticing to scientists because it appears to have been a lake in the early history of the planet, and may contain evidence of past Martian life preserved in carbonate deposits left behind. “I much appreciate the efforts of the engineering team to get us to a dangerous landing site,” Ken Farley, Mars 2020 project scientist, said at the briefing. “It is a spectacular landing site.”

A key part of the mission will be to collect samples from Jezero Crater. Mars 2020 is the beginning of a broader Mars Sample Return program, where Perseverance will cache samples that will be collected and returned to Earth on two later missions launching no earlier than 2026.

That sample collection work won’t begin immediately. Farley said there it will take some time to check out the rover’s instruments, time that will also be used to perform flight tests of Ingenuity, a small helicopter that is hitching a ride on the rover. “All that’s going to take several months, during which science is not the primary focus of the mission,” he said. “As soon as we’re done with that phase, we are ready to go.”

Project scientists are also still developing the strategy for determining which samples to collect, given that the rover has only about three dozen sample collection tubes. Michael Meyer, the lead scientist for the Mars Exploration Program at NASA, said at the MEPAG meeting that 255 people participated in a caching strategy workshop last week, with a report on those plans due in mid-February.

The earliest those samples collected by Perseverance would be back on Earth in 2031, assuming the future Mars Sample Return missions launch on their current schedules, but Farley said it will be worth the wait.

“The samples will return to Earth some time in the 2030s,” he said. “They will be analyzed for decades after that. What that means is that the scientists who are presently on the Mars 2020 science team are unlikely to be the ones to analyze the same. The scientists who will analyze these samples are in school today. They might not even be born yet.”

First, though, Perseverance has to land on Mars. Chen said the mission team is finishing final checkouts of the lander’s EDL system, and then will perform a “cold boot” of its computer system to ensure it’s in the same condition as its counterparts on the ground used for testing. “We want to make sure that we fly the vehicle just like we test it,” he said.

Later updates will refine the lander’s trajectory and give the spacecraft more accurate information about its position. By the final week before landing, he added, “it’s all about making sure we’re all primed and in the best position to succeed, almost literally, for EDL.”

The landing activities will look a little different from past missions, which featured a packed mission control room at the Jet Propulsion Laboratory that erupted in celebrations after receiving word of successful landings. The ongoing pandemic, Chen said, means that there will be fewer people in the room, and with dividers and other protective equipment in place.

“We have to instigate those protective protocols to keep each other safe,” said Matt Wallace, deputy project manager for Mars 2020. “But assuming we do have confirmation of landing, I don’t think COVID is going to be able to stop us from jumping up and down and fist-bumping. You’re going to see a lot of happy people, no matter what, once we get this thing on the surface safely.”