While NASA seeks to eventually transition from the International Space Station to commercial stations in low Earth orbit, the agency is putting on hold a solicitation to support development of such a free-flying platform.
SpaceNews 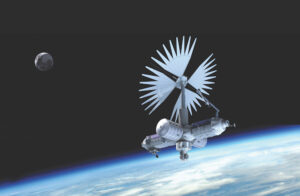 WASHINGTON — While NASA seeks to eventually transition from the International Space Station to commercial stations in low Earth orbit, the agency is putting on hold a solicitation to support development of such a free-flying platform.

One element of NASA’s LEO commercialization strategy, announced in June 2019, was to fund development of commercial platforms, including both modules attached to the ISS as well as commercial stations. Through NASA’s Next Space Technologies for Exploration Partnership (NextSTEP) program, it solicited proposals for a commercial module attached to the ISS, selecting Axiom Space in January.

NASA had also planned to use the NextSTEP program for a separate solicitation, known as Appendix K, to support development of a standalone, or free-flyer, commercial station. However, after issuing a draft solicitation last October and holding an industry day in November, the agency did not issue a final solicitation.

At a session of the ISS Research and Development Conference held online Aug. 27, agency officials confirmed they don’t plan to pursue the free-flyer solicitation for the time being. “We are reevaluating how we want to do that solicitation,” said Angela Hart, LEO commercialization manager at NASA. “At this time we will not be moving forward with Appendix K.”

She did not elaborate on the specific issues with the solicitation that led to that decision, but emphasized that the agency is still interested in supporting development of commercial space stations. “It’s still a very important part of that overall strategy, so we will be doing that in the future,” she said.

“We definitely want to do a free-flyer acquisition,” said Phil McAlister, director of commercial spaceflight programs at NASA, in the same panel. “I can’t promise any specific timelines associated with that, but we are definitely working on the free flyer and intend to release a solicitation soon on that once we get our strategy all agreed to internally.”

Development of commercial space stations is part of NASA’s long-term effort to gradually transition from the ISS to commercial platforms. “At some point in the future, we are going to incrementally phase down ISS operations,” he said, noting there was no specific date for ending the ISS. “Right now, we don’t have any commercial destinations in space, so we’re going to be, for the next several years, working on developing those systems.”

“This year we only got $15 million. That doesn’t enable a whole lot of spacecraft development,” McAlister said. “We need to do a better job there telling our story.”

Hart said NASA has received a number of proposals from industry for such missions, which will be reviewed by a new panel her office will set up. That includes two “mission-specific proposals” currently being considered. She declined to discuss details about those proposed private missions, citing “proprietary considerations” involving them.

One possible customer for one of those private astronaut missions is the actor Tom Cruise, who is seeking to film a movie on the ISS. NASA Administrator Jim Bridenstine tweeted in May that NASA “is excited to work with Tom Cruise on a film aboard the space station,” but did not disclose additional details.

Bridenstine, in recorded remarks at the conference, alluded to that effort although did not mention Cruise by name. “Right now we’re looking at how do we take astronauts that might be interested in maybe making a movie,” he said of ISS commercialization activities. “If a famous actor wants to make a movie, we support that.”