The Perseverance rover is in good condition on the surface of Mars, NASA officials said Feb. 22, showing off stunning video from its landing on the red planet last week.
SpaceNews 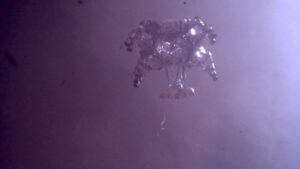 WASHINGTON — The Perseverance rover is in good condition on the surface of Mars, NASA officials said Feb. 22, showing off stunning video from its landing on the red planet last week.

At a briefing at the Jet Propulsion Laboratory, project leaders said the rover was continuing to perform checkouts of various systems, including deployments of its high-gain antenna and instrument mast, since landing in Jezero Crater Feb. 18.

“Perseverance is healthy and continuing with activities as we have planning them over the first few sols on the surface,” said Jessica Samuels, Perseverance surface mission manager at JPL. A “sol” is a Martian day, nearly 40 minutes longer than a terrestrial day.

Those activities have included the deployments of the antenna and mast as well as initial tests of many of its instruments. “We’re happy to report they’re all performing nominally and as expected,” she said of those instruments. “We are very excited to be happily on the surface and exercising our systems.”

The highlight of the briefing was not a status report on Perseverance but instead the release of a video created from footage shot from several high-definition cameras mounted on the spacecraft during its entry, descent and landing (EDL) phase of the mission. The video, heavily promoted by NASA leading up to the briefing, included deployment of the spacecraft’s parachute, release of its heat shield and the lowering of the rover to the surface by its “skycrane,” which flew away after the rover touched down.

“The reaction to the EDL cam videos has been absolutely amazing around JPL,” said Dave Gruel, Perseverance EDL camera lead. “It gives me goose bumps every time I see it.”

The idea for including the camera system, deputy project manager Matt Wallace said, came after watching video shot by his daughter, a gymnast, doing a back flip. “For a moment, I had a glimpse of what it would be like if I could do a back flip,” he said, prompting him to call Gruel about putting similar cameras on Mars 2020. “That’s what led to this system.”

The project added the cameras, commercially available units from FLIR Systems with only minor modifications, on a “do no harm” basis, Gruel said, with no specific success requirements beyond that. “If we could even get just one image or piece of information back from EDL, we shouldn’t get upset and we should be excited.” The cameras, in fact, collected more than 23,000 images, of which about 4,500 have been returned. Those images have been released in the mission’s online archive of raw imagery.

The system also included a microphone on the rover, but it failed to collect any audio during landing. Gruel said a “communications error” between a device that digitized the audio and the computer that stored it caused the data to be lost. However, the microphone is working on the surface, and JPL released audio it collected of rover noises and the Martian wind.

The EDL video was more than just a public relations tool. Engineers have used the imagery to study how the mission’s descent systems worked compared to modeling and tests on the Earth. Allen Chen, the EDL lead for Perseverance, said that those systems worked well other than a few very minor issues, such as a spring in the heat shield deployment system that came loose. “We did have a pretty clean run through entry, descent and landing,” he said. “The landing system worked great.”

Chen said that the rover’s terrain relative navigation system, which compared images it took during descent with an onboard map to enable a precise landing, worked well. “We only missed the targeted pixel by about five meters,” he said. “We really showed that this system can do what we wanted it to do in helping us figure out where to go and go to a safe spot.”