A NASA safety committee warned that the effort to return humans to the moon by 2024, coupled with uncertain funding, could lead to “engineering compromises” in the Artemis program.
SpaceNews 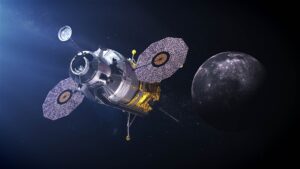 WASHINGTON — A NASA safety committee warned that the effort to return humans to the moon by 2024, coupled with uncertain funding, could lead to “engineering compromises” in the Artemis program.

At an Oct. 1 meeting of the Aerospace Safety Advisory Panel (ASAP), members said “real physical risks” could emerge as NASA presses ahead with the Artemis program without certainty about the funding that will be available to it.

“The panel has an ongoing concern that with each continuing resolution comes directly related and significant budget challenges which, when combined with the direction to be on the moon by 2024, just increases the pressures to make engineering compromises in order to stay on schedule,” said Paul Hill, a member of the committee. “That pressure is only going to go up as launches in 2024 become closer.”

He noted that the issue was not something directly in NASA’s control, but instead was a “weakness of the current federal budgeting environment” that delays decisions on federal budgets. “It creates real risk for NASA” and its exploration programs, he said.

The ASAP meeting took place on the first day of fiscal year 2021, which, like most years in recent memory, started with a continuing resolution (CR). President Donald Trump signed a CR shortly after midnight Oct. 1 that maintains funding for the federal government at fiscal year 2020 levels through Dec. 11.

At a Sept. 30 hearing, Sen. Roger Wicker (R-Miss.), chairman of the Senate Commerce Committee, discussed the CR and its effects on NASA. “That’s never ideal,” he said of the CR, but noted it is relatively brief. He asked NASA Administrator Jim Bridenstine, the sole witness at the hearing about NASA’s programs, what the effects of a longer CR would be.

Bridenstine pointed to the Human Landing System (HLS), a program for which NASA requested more than $3.2 billion in fiscal year 2021. A spending bill that passed the House, though, provided only about $600 million for it, while the Senate has yet to take up its version of that bill.

He said current funding for the HLS program covers the base period of awards made in April to Blue Origin, Dynetics and SpaceX, which go through February 2021. “Between now and February of 2021, I think we’re OK,” he said. “But if we get to February of 2021 without an appropriation, that’s going to really put the brakes on our ability to achieve a moon landing by as early as 2024.”

“The sooner we get the appropriations, the higher the probability of success to the moon landing as soon as 2024,” he said.

At the ASAP meeting, the panel’s concerns went beyond appropriations. Hill praised NASA for incorporating lessons learned from the investigation into the uncrewed test flight of Boeing’s CST-100 Starliner, which suffered some software-related problems, into its Exploration Systems Division (ESD), which oversees the Space Launch System and Orion. “ESD has added more integrated software tests for SLS and is evaluating more Orion test cases” as a result, he said.

However, the panel criticized NASA for not having a fully integrated test capability for SLS/Orion. “The panel has great concern about the end-to-end integrated test capability and plans, especially for flight software,” he said. NASA plans to test subsets of software and avionics systems in separate labs. “As much as possible, flight systems should be developed for success with the goal to test like you fly.”

While NASA has stressed accountability in its overall test program, Hill said the committee felt that was not enough. “The ASAP recommends, though, that in addition to accountability, ESD ensures that their management and test processes and practices are aligned to test like you fly.”

Patricia Sanders, chair of the panel, noted that NASA’s recent reorganization of the Human Exploration and Operations Mission Directorate created an office for systems engineering and integration. However, she said the office was, at least for now, focused on studying overall exploration mission architectures.

“It’s a very necessary function, but not the same as true technical engineering integration,” she said. “The panel clearly has a persistent interest in integration, which will only become more challenging with the added complexity of future missions.”