NASA has issued a request for information for launch services for its Europa Clipper mission, a sign the agency is taking advantage of language in a recent appropriations bill that allows it to consider alternatives to the Space Launch System.
SpaceNews 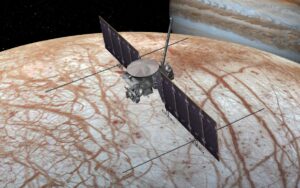 WASHINGTON — NASA has issued a request for information for launch services for its Europa Clipper mission, a sign the agency is taking advantage of language in a recent appropriations bill that allows it to consider alternatives to the Space Launch System.

The Jan. 26 request for information seeks data from companies that believe they have vehicles that can launch the mission, which will go into orbit around Jupiter and make dozens of close approaches to Europa, an icy, potentially habitable moon.

The launch vehicle would have to be able to launch the spacecraft, weighing at least 6,065 kilograms, on a trajectory that would incorporate gravity-assist flybys of Mars and Earth before arriving at Jupiter. The launch would take place during a three-week window in October 2024.

At a July 2020 briefing to a National Academies committee, Europa Clipper project officials presented a proposal for once such trajectory. A launch in October 2024 would be followed by flybys of Mars in February 2025 and of Earth in December 2026, with the spacecraft entering orbit around Jupiter in April 2030. NASA’s Launch Services Program, the briefing stated, had determined that trajectory using a “commercial option” for a launch vehicle was feasible.

NASA, in recent budget proposals, sought to launch Europa Clipper on a commercial vehicle rather than SLS. It argued that doing so would save the agency as much as $1.5 billion and free up SLS vehicles for use in the Artemis program of human lunar exploration. Congress, though, mandated the use of SLS for Europa Clipper in appropriations bills through fiscal year 2020.

Another factor in the launch vehicle debate emerged in August, when NASA disclosed it was investigating “potential hardware compatibility issues” between SLS and Europa Clipper. The agency didn’t elaborate on the specific issues, believed to be associated with vibrations and other environmental factors the spacecraft would experience during launch.

Congress, in the fiscal year 2021 omnibus spending bill passed last month, gave NASA some flexibility regarding the launch of Europa Clipper. The bill again directed the use of SLS for the mission, but only if “the SLS is available and if torsional loading analysis has confirmed Clipper’s appropriateness for SLS.” The latter condition refers to the hardware compatibility issues previously reported by NASA.

The most likely commercial option for launching Europa Clipper is SpaceX’s Falcon Heavy. United Launch Alliance’s Delta 4 Heavy, an earlier option, is no longer available since the remaining vehicles have all been assigned to national security launches. ULA plans to retire the vehicle by the middle of the decade as it transitions to the Vulcan Centaur.

Both Vulcan Centaur and Blue Origin’s New Glenn could be alternatives, but neither vehicle has made its first flight. The request for information states that the vehicle for Europa Clipper must meet NASA’s Category 3 requirements for launch services, which requires a vehicle have at least three successful launches, including at least two consecutive successful launches. Falcon Heavy has flown three times so far, all successfully.

The appropriations bill that gave NASA the option to consider alternatives to SLS did direct the agency to conduct a “full and open competition” for launch services if it chose not to use SLS, including allowing vehicles that are not currently on its NASA Launch Services 2 contract.

Responses to the request for information are due to NASA by Feb. 8. NASA hasn’t stated when it will decide on how to launch Europa Clipper, or issue a formal request for proposals for launch services, but agency officials said last summer they had hoped to decide how they would launch the mission by the end of 2020.