NASA announced Feb. 9 it wants to obtain a seat on the next Soyuz mission to the International Space Station, launching in just two months, to ensure a U.S. presence on the station in the event of any commercial crew delays.
SpaceNews 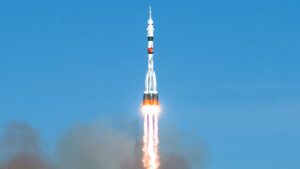 WASHINGTON — NASA announced Feb. 9 it wants to obtain a seat on the next Soyuz mission to the International Space Station, launching in just two months, to ensure a U.S. presence on the station in the event of any commercial crew delays.

In a procurement synopsis posted late Feb. 9, NASA said it wanted the seat on the next Soyuz mission as it “minimizes risks associated with any interruption in U.S. crew member presence on ISS” that might be caused by problems with commercial crew vehicles.

There are no known issues with SpaceX’s Crew Dragon spacecraft, one of which is currently docked to the station for the Crew-1 mission. The agency said Jan. 29 the next such mission, Crew-2, is scheduled for launch April 20, allowing the Crew-1 mission to return in late April or early May. Boeing’s CST-100 Starliner is now scheduled to make a crewed test flight to the station no earlier than September, after a second uncrewed test scheduled for launch March 25.

“Experience has shown that new launch capabilities may encounter unanticipated delays or difficulties maintaining initial schedules,” NASA noted in its procurement synopsis, which refers to commercial crew vehicles as U.S. Crew Vehicles, or USCV. “Even with no delays of the next USCV launch to ISS, a contingency undock of that USCV could occur due to unforeseen circumstances.”

NASA has long expressed a desire for “mixed crews,” with American astronauts continuing to fly on Soyuz vehicles while Russian cosmonauts fly on commercial crew spacecraft, so that there is at least one American and one Russian on the station should either Soyuz or commercial crew vehicles be grounded for an extended period. Those seats would be bartered, rather than purchased.

“We look forward to the next crew rotation on NASA’s SpaceX Crew-2 mission, and we’re looking to ensure we can continue to maximize our use of the station and minimize any risk by flying a U.S. astronaut on the upcoming spring Soyuz by providing in-kind services,” Robyn Gatens, acting director for the ISS at NASA Headquarters, said in an agency statement about the filing.

As she noted, NASA does not plan to purchase the Soyuz seat, as it has done in the past. “In consideration for this supplemental crew transportation service, NASA is considering providing similar in-kind services,” the synopsis stated. NASA did not disclose what those “in-kind services” would be, although the synopsis is titled “International Space Station Seat Exchange.”

The Soyuz mission in question, Soyuz MS-18, is scheduled for launch around April 10. The Russian space agency Roscosmos has assigned three Russian cosmonauts — Oleg Novitsky, Pyotr Dubrov and Sergei Korsakov — to the mission, making it the first all-Russian Soyuz crew in more than two decades.

One of the three cosmonauts would have to be removed to make room for a NASA astronaut. Notably, NASA astronaut Mark Vande Hei has been seen accompanying the assigned Soyuz MS-18 crew, suggesting he may be preparing to go on the mission. Vande Hei was the backup to Kate Rubins, the NASA astronaut who launched on the Soyuz MS-17 spacecraft to the ISS in October 2020. Novitsky and Dubrov were also backup crew for that mission.

Roscosmos told the Russian news agency TASS Feb. 10 that it expects to “formalize the relations with the partners on this April flight,” but didn’t elaborate on what the terms of any such agreement would be.