Italy is the latest country to sign an agreement to cooperate with NASA on the Artemis human lunar exploration program, although the details of Italy’s participation have yet to be worked out.
SpaceNews 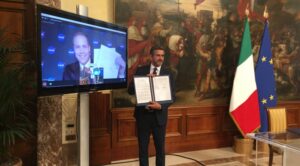 WASHINGTON — Italy is the latest country to sign an agreement to cooperate with NASA on the Artemis human lunar exploration program, although the details of Italy’s participation have yet to be worked out.

In a Sept. 25 ceremony held by videoconference, NASA Administrator Jim Bridenstine and Riccardo Fraccaro, undersecretary to Italian Prime Minister Giuseppe Conte with responsibility for space, signed a joint declaration of intent to cooperate on Artemis.

“With a long history of successful collaboration in human spaceflight, as well as in Earth and space science, the Italian government’s strong support for Artemis assures this partnership will extend to cooperation in the next phase of exploration on the lunar surface,” Bridenstine said in a statement.

Neither NASA nor the Italian space agency ASI announced any specific projects that are part of that cooperative effort. In an Italian-language statement, Giorgio Saccoccia, president of ASI, said subsequent “implementation agreements” would specify details of that cooperation. That statement noted ASI’s interest in supply crew habitats, lunar surface scientific investigations and telecommunications services.

An Italian publican reported that Italy was planning to invest more than 1 billion euros ($1.2 billion) but it wasn’t clear if that total included previous commitments by the Italian government to European Space Agency exploration programs or new Italian investment in Artemis-related programs.

Italy pushed for support for exploration programs, such as the ESPRIT and iHab modules proposed for NASA’s lunar Gateway, at ESA’s Space19+ ministerial meeting last November in Spain. Those modules would be added to the Gateway when the Artemis programs shifts into a second, “sustainable” phase after the planned 2024 human return to the moon. “The reason why we made a very large contribution to the iHab module is that we want to play a role on the sustainable part of Artemis,” Saccoccia said in an interview at the end of the Space19+ meeting.

Italy joins several other countries that have signaled their intent to participate in the Artemis program, either through agreements with NASA or funding commitments. In February 2019 the Canadian government announced it would provide a robotic arm for the lunar Gateway, spending $1.5 billion over 24 years on the arm and related efforts. In July, the Japanese government signed an agreement with NASA to cooperate on the Artemis program, with plans to contribute systems such as a pressurized lunar rover.

Megan Clark, head of the Australian Space Agency, said in a Sept. 24 webinar that the agency was working on the first aspect of its “Moon to Mars” initiative, developing a supply chain of Australian companies that can contribute. The agency plans a “Trailblazer” mission as part of the initiative, although what that mission will do has not been defined.

“We’ve already seen some wonderful momentum and real growth” in the Australian space industry because of that program, she said, emphasizing the country’s commitment to “stand shoulder to shoulder with our partners, the United States, on going to the moon and on to Mars.”