NASA is delaying a decision on which companies will proceed in its effort to develop human lunar landers for the Artemis program as it grapples with a funding shortfall and a change in administrations.
SpaceNews 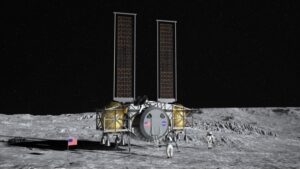 WASHINGTON — NASA is delaying a decision on which companies will proceed in its effort to develop human lunar landers for the Artemis program as it grapples with a funding shortfall and a change in administrations.

In a Jan. 27 notice to the three teams participating in the Human Landing System (HLS) program, NASA announced it will execute two-month no-cost extensions to their contracts, which were set to end on Feb. 28. News of the extension was first reported by The Verge.

The no-cost extensions allow the contracts awarded last April to Blue Origin, Dynetics and SpaceX to run through April 30, but do not provide the companies with any additional funding. The extension will give NASA more time to determine which companies, if any, receive “Option A” awards for lander development.

“The timing of this extension is designed to allow NASA to complete the Option A evaluation, selection and award process and to preserve the ability to seamlessly transition from the base period contracts to the Option A contracts,” the agency said in a statement posted to the HLS website.

One industry source, speaking on background, said the extension was expected because of uncertainty about how NASA will proceed with the HLS program. While NASA said that it could make Option A awards before April 30, that source said it would not be surprising to see additional delays in the program.

The main reason behind that uncertainty is the amount of funding available to HLS is far less than what the agency requested. NASA’s fiscal year 2021 budget request sought $3.3 billion for the program, but the final omnibus appropriations bill enacted in December provided $850 million.

NASA has said little about the status of the program since then, in part because of its ongoing review of Option A proposals submitted by the HLS companies. “Our team is off and we will be making a decision on which systems we’ll be investing in their lunar landing demonstrations,” Kathy Lueders, NASA associate administrator for human exploration and operations, at a Jan. 14 meeting of two NASA Advisory Council committees. She added NASA was still “shooting for the 2024 timeframe” for that first landing.

But in an interview Jan. 16 in his final days in office, then NASA Administrator Jim Bridenstine acknowledged that the limited funding will force NASA to change its strategy. The agency had hoped to fund development of two lander systems in an approach similar to the commercial cargo and crew programs, providing competition between the companies and a backup should one company stumble.

“The appropriation that we asked for was $3.3 billion for the Human Landing System. We didn’t get that,” he said, while noting that NASA still got “a lot” of funding for the program with bipartisan support.

“NASA needs to go back and look at what the options are to go to the moon as quickly as possible,” he said.

But “as quickly as possible” may not be the 2024 goal set by the Trump administration nearly two years ago. The Biden administration has not commented on its plans for NASA yet, although the Democratic Party platform did include language endorsing a human return to the moon. That document, though, did not explicitly endorse doing so by 2024, or any other specific date.