NASA should be able to set a new date for the Artemis 1 launch within a few weeks of the Green Run static-fire test of the Space Launch System core stage, assuming that test goes as expected.
SpaceNews 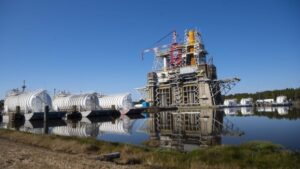 WASHINGTON — NASA should be able to set a new date for the Artemis 1 launch within a few weeks of the Green Run static-fire test of the Space Launch System core stage, assuming that test goes as expected.

NASA is scheduled to conduct the static-fire test March 18 at the Stennis Space Center in Mississippi during a two-hour window between 3 and 5 p.m. Eastern. The core stage’s four RS-25 engines will fire for up to eight minutes, although agency officials said last month they will collect all the data they need for their test objectives after four minutes.

This test is a rerun of the first Green Run test Jan. 16, which was halted after 67 seconds when the hydraulic system in one engine hit “intentionally conservative” limits in its flight software. NASA had scheduled the second test for Feb. 25, but postponed it days in advance because of a problem with a “prevalve” in the core stage that supplies liquid oxygen to the engines.

Preparations for the upcoming test are going well, NASA Acting Administrator Steve Jurczyk said in an interview March 17. “The team is ready to go,” he said from Stennis. “So long as the weather is not really bad, like lightning or high winds, then we should be able to get it off tomorrow.”

If the test does go well, he said the agency should be able to soon confirm a launch date for the Artemis 1 mission, which will use the core stage being tested at Stennis. That mission is currently projected to launch in November. “I think that, within probably just a few weeks, they’ll take a look at the schedule one more time and confirm whether we can make November of this year or if we need to go out a little bit.”

The margin that NASA had in its schedule for a November launch has largely been used up, he said, because of delays caused by the pandemic and a series of tropical weather systems that passed near Stennis last summer and fall, as well as technical issues during testing. However, he said the program has been working to “optimize” the work flow at the Kennedy Space Center once the core stage arrives there that will allow them to compress the schedule there “a little bit.”

“I think in a few weeks we’ll know if November is possible or we need to push it out maybe a month or two,” he said.

As NASA prepares for the Green Run test, it’s embarking on a study looking at ways to lower the cost of the SLS program. The internal study, first reported March 15 by Ars Technica, is looking for “efficiencies and opportunities to reduce costs” across the various elements of the Artemis program, according to an agency statement.

That study will involve NASA working with industry to identify requirements that have particular cost and schedule impacts, and possibly shifting the roles of government and industry. “The goal is to get the per-launch cost down for SLS,” he said, although the agency has not set a specific cost target.

“Nothing is off the table right now,” he said. “We’d just like the team to go off and look at everything that makes sense to look at.” Only later, he said, would the study develop a range of potential cost reductions for SLS.

The study was not requested by the new Biden administration, Jurczyk said, but instead had it roots in discussions before Jim Bridenstine and Jim Morhard stepped down as administrator and deputy administrator, respectively, in January. “We are not counting on very large budget increases, so if we want to have a reasonable cadence of Artemis missions and have the funding to develop the Human Landing System and surface systems, we need to try to get those SLS per-launch costs down.”

The goal is to have an interim report ready in July or August, which may prompt some additional work on some concepts. “We’d like to get this done as soon as possible, but also make sure that the things that we’re deciding to implement are really going to be effective and are really going to reduce costs,” he said.

Another SLS issue emerged recently regarding the agency’s decision not to use the vehicle to launch the Europa Clipper mission to Jupiter. Language in the fiscal year 2021 omnibus spending bill allowed NASA to use an alternative vehicle for that mission if the SLS vehicle was not available of if “torsional loading analysis” found that the spacecraft was incompatible with Clipper.

In a March 15 statement, Rep. Brian Babin (R-Texas), ranking member of the House space subcommittee, said he had contacted Jurczyk Feb. 22, asking for that analysis, but had not received a response. “I’m expecting a prompt response from NASA answering our questions on their analyses of launch vehicles, as well as cost, schedule, and mission impacts,” he said in the statement.

He said that analysis showed that lateral loads on the spacecraft during launch on SLS were higher than the spacecraft was designed for. “Given that the design is done and some of the hardware is already manufactured, it was going to be very challenging from a cost and schedule standpoint to modify the spacecraft or develop an isolation system to handle the lateral load issue.”

NASA is proceeding with plans to select a commercial launch vehicle for Europa Clipper, issuing a formal request for proposals March 5. That means that, for the foreseeable future, the SLS manifest will exclusively be launches of Orion spacecraft on Artemis missions.

Jurczyk said NASA is not abandoning the use of SLS for other missions, including development of a cargo variant. He cited as one example ongoing work by NASA’s Science Mission Directorate regarding how SLS could support future outer planets missions. “We’re still going to continue to analyze and develop the cargo version,” he said.