NASA’s Mars InSight lander is poised to make the ultimate field recording when Perseverance attempts its Feb. 18 landing. Politics could squelch an even better recording opportunity when China’s Tianwen-1 lands this summer.
SpaceNews 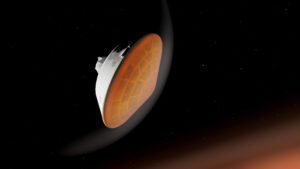 HELSINKI — As NASA’s Perseverance Mars rover barrels through the Martian atmosphere this week and jettisons ballast that would otherwise doom its landing, the U.S. space agency’s two-year-old InSight lander will be listening intently, collecting data that could help scientists better understand the planet’s composition.

While Perseverance’s Feb. 18 landing attempt marks the first opportunity for a heavily instrumented Mars lander to record the acoustic and seismic impacts of another spacecraft’s entry, descent and landing (EDL) sequence, there’s a second such opportunity later this year when China’s recently arrived Tianwen-1 orbiter sends it rover down to the surface.

However, longstanding U.S. restrictions on working with China — and China’s limited release of mission specifics —could see an opportunity to collect unique data on Mars’ atmosphere and interior go begging.

Perseverance is scheduled to land in Jezero Crater at 3:55 p.m. Eastern Feb. 18. The seven-minute EDL sequence will generate seismic and acoustic waves through the sonic boom created by hypersonic deceleration during atmospheric entry and the high-velocity impact of a pair of 77-kilogram tungsten blocks, known as Cruise Mass Balance Devices (CMBDs), jettisoned at an altitude of 1,450 kilometers.

Knowing the timing and location in advance brings added value to any detections, helping InSight overcome the limitations of relying on a single station for recording seismic events.

These events could provide InSight, with its seismometer and auxiliary sensor instrumentation, with a unique opportunity to advance knowledge of the properties of the Martian crust and mantle, the structure and properties of Mars’ atmosphere and interior and improve understanding of those seismic waves created by impacts — events which have yet to be conclusively detected and identified — according to a paper by InSight team member Benjamin Fernando and colleagues. It could also be a first instance of “hearing” a spacecraft making its landing on another planet.

The value of such data could potentially be multiplied through Tianwen-1’s EDL, especially as it could occur much closer to InSight. To make the most of the event, InSight’s science team needs to know more about Tianwen-1’s design and the timing and location of its landing attempt.

Tianwen-1 entered Mars orbit early Feb. 10 but the rover EDL timeline is vague, ex- pected only in May or June. The Perseverance landing will occur 3,450 kilometers west from InSight but the Tianwen-1 rover is expected to land much closer, within a southern section of Utopia Planitia.

“All other things being equal, being two to three times closer will increase the signal strength by four to nine times,” Benjamin Fernando told SpaceNews. “So it would potentially be significantly louder.”

China, however, seldom reveals the detailed timing of major mission events until after the fact. While Utopia Planitia is the chosen landing area — selected based on engineering, science and other constraints — landing coordinates of 110.318 degrees east longitude and 24.748 degrees north latitude reported in official publication China Space News were later removed from online versions of the article.

The timing of major events in the recent Chang’e-5 lunar sample return mission were only discernible to followers in and outside China by scouring technical papers for clues, monitoring spacecraft tracking carried out by amateurs and spotting a leak via Chinese social media.

Reaching out to Chinese entities for this information is not straightforward, especially for NASA. “We have not yet contacted the Chinese about obtaining this information,” Bruce Banerdt, Insight’s principal investigator, told SpaceNews. “Contacts between NASA and our Chinese counterparts are limited under U.S. law. We are currently in the process of exploring our options.”

Bilateral cooperation between NASA and Chinese organizations is currently restricted by the so-called Wolf Amendment, a provision first added to a NASA spending bill in 2011 by then-U. S. Rep. Frank Wolf (R-Va.) that requires NASA to seek congressional approval for any bilateral collaboration with Chinese entities. Similar language has been added to subsequent appropriations, including the 2021 spending bill enacted in December.

“The ability of the InSight science team to ‘listen’ to Tianwen-1 EDL would depend on a variety of technical factors and, most importantly, whether China makes detailed information available on its specific plans for the attempt,” NASA spokesman Sean Potter said via email.

Asked if NASA could reach out to its Chinese counterparts, Potter confirmed that inquiries and coordination “would fall under the restrictions on NASA’s bilateral interaction with China.”

While collaboration with China is not entirely prohibited, NASA would need to notify Congress in advance and provide certification that there are no risks for a specific engagement. NASA and China were able to discuss the potential for the NASA Lunar Reconnaissance Orbiter to monitor the landing of China’s Chang’e-4on the lunar far side in early 2019. The two sides also occasionally meet for the U.S.-China Civil Space Dialogue. A third and most recent such meeting washeld in Beijing in 2017 while a fourth was delayed partly by the COVID-19 outbreak. The Chinese Academy of Sciences, which is involved in Tianwen-1 science payloads and spacecraft integration, had not responded by press time to a request for comment on the possibility of coordination or release of information.

The effective ban of bilateral activities applies only to NASA, the White House Office of Science and Technology Policy (OSTP) and the National Space Council. Scientists at other U.S. institutions can, for example, request access to China’s newly acquired lunar samples by following procedures announced in January by the China National Space Administration, a month after Chang’e-5 delivered the goods to Earth. There is no platform yet for sharing Tianwen-1 mission data, but conversations between Chinese and non-NASA scientists could take place, though passing along sensitive information relating to missions may not be straightforward.

Another route would be for NASA to contact the European Space Agency, which provided ground support for Tianwen-1 for launch and early orbit operations and Earth-Mars transfer. ESA will also conduct a technology demonstration to verify the proximity link interoperability between ESA’s Mars Express spacecraft and the Tianwen-1 rover, which may include monitoring the EDL. These plans are not yet finalized, however.

InSight should be able to get prepared for the Tianwen-1 rover if the timing and loca- tion information becomes available a week before the event, according to Fernando.

Rover design information would prove useful also. “It all depends on what the spacecraft design is,” says Fernando. “It’s conceivable but not necessary that they use similar sorts of CMBDs to InSight, we really don’t know.”

Detecting Perseverance and Tianwen-1 would be extremely valuable scientifically. “One measurement with a known source time, location and magnitude would be incredibly useful, two would be amazing. Then, we can start to do things like considering what effects local and 3D structure might have on the propagation from the source to recover,” says Fernando.

But first something may need to give on Earth for impacts to be felt on Mars.

This article first appeared in the Feb. 15 issue of SpaceNews magazine.