NASA’s Juno mission orbiting Jupiter is seeking a long-term extension that would allow the spacecraft to carry out new studies of the planet and some of its largest moons.
SpaceNews 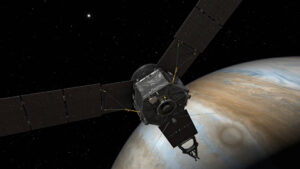 WASHINGTON — NASA’s Juno mission orbiting Jupiter is seeking a long-term extension that would allow the spacecraft to carry out new studies of the planet and some of its largest moons.

Juno, part of the New Frontiers class of medium-sized planetary science spacecraft, is finalizing a proposal for an extended mission that would keep the spacecraft operating through September 2025, said Scott Bolton, principal investigator for Juno, at a Sept. 2 meeting of the Outer Planets Assessment Group online.

Juno has been in orbit around Jupiter since July 2016 on a prime mission of 34 orbits currently scheduled to end in July 2021. That mission is devoted to studying the giant planet’s gravity and magnetic fields in order to better understand its interior.

An extended mission will be more comprehensive. “It really becomes a full system explorer, not as focused as the prime mission was,” Bolton said.

Scientists plan to take advantage of the spacecraft’s gradually shifting orbit around Jupiter. Juno is in an elliptical orbit with a 53-day period whose closest point, or perijove, to Jupiter was initially around the planet’s equator. That perijove has been gradually shifting north, and at the end of the prime mission will be at a latitude of 28 degrees north. That migration will continue through the extended mission, reaching 63 degrees north.

“This gives us close proximity to the northern parts of Jupiter, which is a new frontier,” he said. That includes studies of the aurora seen in the polar regions. “We’ve seen a lot of activity there, and we’ll be able to explore it very close up, whereas in the primary mission we were restricted to the lower latitudes.”

Juno’s shifting orbit will also sweep through the orbits of three of Jupiter’s largest moons: Ganymede, Europa and Io. “The satellites get into view for us and allows close flybys,” he said. Those flybys in the current proposal include a pass 1,000 kilometers from Ganymede in mid-2021 and another just 320 kilometers from Europa in late 2022.

The spacecraft will use its instruments to study the moons. Europa is of particular interest because the icy moon likely has a subsurface ocean of liquid water and may be habitable. Bolton said Juno’s flybys can help measure the thickness of Europa’s outer ice layer and also search for plumes of icy material emitted from the surface.

That would allow Juno to complement future missions to Jupiter, notably NASA’s Europa Clipper and the European Space Agency’s Jupiter Icy Moons Explorer, or JUICE. Observations of Io, the volcanic larger inner moon of Jupiter, would also benefit the proposed Io Volcano Observer mission, one of four finalists in the latest, ongoing round of the Discovery program of low-cost planetary science missions.

Bolton said another aspect of the changing orbit will be observations of Jupiter’s tenuous rings. “There’s been very few images of, and science done on, Jupiter’s rings,” he said. That will include characterizing how material in the rings clumps together.

The proposal is still being finalized, Bolton said, and is due to NASA at the end of the month. He expected the agency to decide on whether to proceed with an extended mission by the end of the year. “It may be limited by the available budget,” he cautioned.

Juno’s mission has already been extended because of concerns with the spacecraft’s main engine, which was originally designed to move the spacecraft from an initial orbit with a period of 53 days to a 14-day orbit. NASA elected to keep Juno in that 53-day orbit, which still allowed it to perform its planned science, but required stretching out the prime mission so that Juno could complete the same number of orbits.