With a flagship Mars rover mission launched, NASA’s planetary science division is turning its attention to a pair of asteroid missions set to launch next year.
SpaceNews 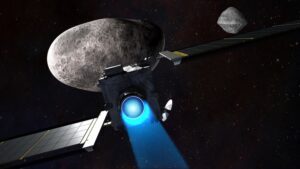 WASHINGTON — With a flagship Mars rover mission launched, NASA’s planetary science division is turning its attention to a pair of asteroid missions set to launch next year.

During an Aug. 17 meeting of NASA’s Planetary Science Advisory Committee, Lori Glaze, director of NASA’s planetary science division, noted that once the pandemic began earlier this year, the division’s highest priority was to ensure a successful launch of the Mars 2020 mission this summer. NASA elevated Mars 2020 to one of the agency’s overall top priorities, alongside the Demo-2 commercial crew mission, because of the potential of a two-year delay, and up to $500 million in additional costs, if the mission missed its launch window.

Mars 2020 successfully launched July 30 and is en route to Mars, slated to land there next February. “We met that launch window and achieved that,” she said.

The division is now shifting its priorities to two missions, the Double Asteroid Redirection Test (DART) and Lucy, both scheduled for launch in 2021. “These are very high priority as we’re looking at the various COVID impacts to our portfolio,” she said. “We’re working very hard to keep those teams as safe as possible but, where we have limited resources and limited facilities, we’re trying to prioritize those missions.”

Lucy is one of two Discovery-class missions selected by NASA in 2017. It is scheduled to launch in October 2021 on a United Launch Alliance Atlas 5. The mission has a narrow launch window in order to fly a complex trajectory that will allow it fly by several Trojan asteroids in the same orbit around the sun as Jupiter during its 12-year mission.

Glaze said the Lucy mission is approaching a milestone known as Key Decision Point D that will permit it to proceed into final integration and testing. That work is continuing with “team health and safety foremost” as the pandemic persists.

DART, a planetary defense mission that will collide with a moon orbiting the near Earth asteroid Didymos to test a technique to deflect its orbit, is scheduled for launch in late July 2021. DART is currently in its own final assembly and testing operations. “The mission is moving along really well,” she said. “The mission is on track right now for a July 2021 launch aboard a SpaceX Falcon 9, and we’re going to work really hard to hold to that.”

However, DART has had some challenges, another NASA official explained later at the same meeting. Lindley Johnson, head of the Planetary Defense Coordination Office, said delivery of the spacecraft bus to the Applied Physics Laboratory from Aerojet Rocketdyne, which installed its electric propulsion system, was delayed about a month and a half because of the pandemic. “So it has put the DART integration and test schedule behind about six weeks or so,” he said.

The mission team is trying to recover some of that time, he said, and may increase the number of shifts to do so. However, delivery of the spacecraft’s solar arrays later this year is expected to be about a month late.

Johnson said that some of the technologies on the spacecraft, such as the NEXT-C electric propulsion system and the Roll-Out Solar Array (ROSA), have played a role in the delays. “The amount of testing that needs to go on prior to delivery of these components to a flight project wasn’t quite understood and realized,” he said.

Neither NEXT-C nor ROSA are completely new systems. NEXT-C is an improved version of the electric propulsion used on NASA’s Dawn and Deep Space 1 missions, while ROSA, a solar array that is unrolled into its flight configuration after launch, had been tested on the International Space Station. But, he said, “neither one of those components started out with a plan and schedule that was really sufficient to meet flight project requirements.”

“It’s going to be a continuing challenge for DART as they pull the spacecraft together and do the testing over the next nine months or so,” Johnson said. “This an area where we may have some lessons learned from the project with these new technology systems.”