House and Senate negotiators on Dec. 3 released a compromise version of the National Defense Authorization Act for Fiscal Year 2021.
SpaceNews 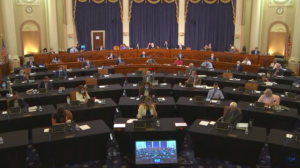 WASHINGTON — House and Senate negotiators reached an agreement on a final version of the National Defense Authorization Act for Fiscal Year 2021. The compromise bill released by defense committees Dec. 3 will head to the House and Senate floors for votes expected next week before it goes to President Trump, who has threatened to veto it.

The 4,517-page bipartisan compromise bill authorizes $740.5 billion for national defense but faces a veto threat from Trump, who is demanding that the NDAA include language to repeal legal protections for social media companies. Defense committee aides told reporters on Thursday that there is growing frustration about the NDAA being used as a vehicle for non-defense issues because it’s one of the few pieces of legislation that gets passed every year.

“This year marks the 60th consecutive year Congress has fulfilled its constitutional duty to provide for the common defense by passing the National Defense Authorization Act,” said a summary of the bill released by the Senate Armed Services Committee. This year’s bill is named after the retiring ranking member of the House Armed Services Committee, the William M. “Mac” Thornberry National Defense Authorization Act for Fiscal Year 2021.

Space Force does not have to use Navy ranks. The House version of the NDAA directed that the Space Force use Navy ranks and grades. But the Senate bill contained no such provision. The compromise bill strikes the House language and directs the secretary of the Air Force to brief committees on the Space Force’s recommended rank structure for officers and enlisted personnel at least 15 days prior to implementation.

Members of other military services can voluntarily transfer to the Space Force. But the NDAA also directs the Chairman of the Joint Chiefs of Staff and service chiefs to report back on the space-related missions and expertise that should remain within each service.

Air Force bases cannot be transferred to the Space Force without briefing congressional defense committees and getting approval.

The secretary of the Air Force must provide a report on the selection process and criteria used to determine the permanent site for Space Command headquarters.

The Air Force is directed to start research and development projects to promote competition in the National Security Space Launch program. The goal is to “maintain competition in order to maximize the likelihood of at least three National Security Space Launch providers competing for Phase 3 contracts; and to support innovation for national security launches.” The bill authorizes up to $90 million in fiscal year 2021  subject to approval from appropriators.

The secretary of the Air Force has to submit by June 2021 a plan for a five-year acquisition strategy for small launch and satellites. “This plan should include steps to provide stability in budgeting and acquisition of capabilities, and flexibility for fair competition.”