The White House plans to nominate Bill Nelson to be the next administrator of NASA, putting the former senator in charge of the agency he once advocated for on Capitol Hill.
SpaceNews 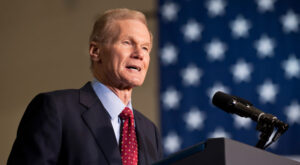 WASHINGTON — The White House plans to nominate Bill Nelson to be the next administrator of NASA, putting the former senator in charge of the agency he once advocated for on Capitol Hill.

According to several sources, the administration is expected to formally announce the nomination as soon as March 19. An announcement was reportedly expected March 18, but deferred a day to avoid conflicting with the Green Run static-fire test of the Space Launch System core stage the same day at the Stennis Space Center.

At a March 18 press briefing, White House press secretary Jen Psaki declined to say if a nomination was imminent. “I don’t have any personnel announcements to make,” she said when asked about reports about the potential nomination. “I’ve certainly seen the reports. As we have any updates, we’ll provide them.”

Nelson emerged as a potential nominee nearly a month ago. At the time, Psaki said the White House had no schedule for nominating an administrator. Rumors that he would be nominated in early March came and went without an announcement.

Nelson is a familiar figure in the space community from his three terms in the Senate from Florida, including roles as the top Democrat on the Senate Commerce Committee and its space subcommittee. He was a leading figure in the development of a 2010 NASA authorization act that supported continued development of Orion, along with the new SLS, after the cancellation of the Constellation program. That legislation also authorized NASA’s commercial crew program.

In 2017, he led the opposition to the Trump administration’s nomination of Jim Bridenstine, a Republican congressman from Oklahoma, arguing at Bridenstine’s confirmation hearing that the “leader of NASA should not be political.” Bridenstine was confirmed in April 2018 on a party-line vote, and Nelson later praised Bridenstine for keeping the agency apolitical.

Nelson will be familiar to many current senators, having served through 2018, when he lost his bid for a fourth term there. He already appears to have the support of one Republican in the evenly-divided Senate. “Bill Nelson would be an excellent pick to lead @NASA,” tweeted Sen. Marco Rubio (R-Fla.), who served with Nelson in the Senate from 2011 to the end of Nelson’s final term in 2018.

Bill Nelson would be an excellent pick to lead @NASA

Opinions of Nelson in the commercial space industry are mixed, particularly among its more entrepreneurial elements, who recall the doubts he had about the commercial crew program. Nelson later supported the program.

Having Nelson as NASA administrator could be beneficial, said one commercial space pioneer, provided he is the Biden administration’s preferred choice for the job. “When you have a nominee who really is wanted by the President of the United States, that is not a bad thing,” said Jeffrey Manber, chief executive of Nanoracks, during a Washington Space Business Roundtable webinar March 18.

“All I know, from what I read, is that the president is pushing to have Bill Nelson to be the head of NASA, and I think that will speak very well for NASA’s role at the table, especially if there is not a space council, especially with the major social and national challenges we face,” he explained. “I think it would be very encouraging to know that, if it is Bill Nelson, it was done by the president.”

Besides Nelson, the administration is also reportedly planning to nominate Pam Melroy as deputy administrator, although it was not clear if she would be nominated at the same time as Nelson. Melroy is a former astronaut who later held positions at the Federal Aviation Administration’s Office of Commercial Space Transportation and at DARPA. She was also a member of the incoming Biden administration’s NASA transition team.