A new “national initiative” wants to promote the development of satellite servicing and in-space assembly technologies among U.S. government agencies that have differing views on the value of such capabilities.
SpaceNews 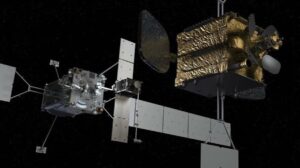 WASHINGTON — A new “national initiative” wants to promote the development of satellite servicing and in-space assembly technologies among U.S. government agencies that have differing views on the value of such capabilities.

The On-Orbit Servicing, Assembly and Manufacturing (OSAM) National Initiative is intended to exchange information and establish partnerships among government agencies, and with industry and academia, on the use of such technologies to repair existing satellites and create new capabilities in space.

“It’s going to be really important to work together collaboratively, because we want to move forward with these OSAM technologies and advance them collectively as a suite of capabilities,” said Deborah Tomek, NASA senior advisor for OSAM and one of the leads of the new initiative, said during an Oct. 29 presentation at the Global Satellite Servicing Forum, a conference organized by the Consortium for Execution of Rendezvous and Servicing Operations (CONFERS).

The OSAM National Initiative has several priorities, she said. That includes facilitating relationships among the various organizations involved in the field, as well as determining where government agencies should fund OSAM technologies versus areas where companies are making their own investments. Other priories include identifying new applications of the technologies and serving as a “knowledge center” to share information.

A near-term effort is a series of capability assessments that will help identify any gaps in technology developments. “Once we understand and have a broader picture of that, then we can look at how best to influence and fund those investments,” she said.

Tomek said the initiative started as a grassroots effort and became more formal a couple months ago. “We’re trying to incrementally drive these partnerships,” she said.

NASA has been perhaps the biggest advocate for OSAM technologies among U.S. government agencies. In addition to a series of robotic refueling experiments on the International Space Station, it is funding a robotic satellite servicing mission called OSAM-1 and previously known as Restore-L. Scheduled for launch in 2024 and using a commercial satellite bus provided by Maxar, OSAM-1 will rendezvous with the Landsat 7 spacecraft and refuel it, and then conduct a series of demonstrations of in-space robotic assembly of an antenna and a boom. OSAM-2, formerly known as Archinaut 1, is a spacecraft under development by Made In Space to build and deploy a solar array in space.

Tomek said NASA sees both near-term and long-term applications for OSAM capabilities. They range from in-space assembly of large space telescopes to supporting lunar exploration. NASA’s Human Exploration and Operations Mission Directorate, she noted, was interested in OSAM technologies for Artemis and wants “to leverage a lot of the work that’s already ongoing.”

DARPA is also supporting OSAM technology development with its Robotic Servicing of Geosynchronous Satellites (RSGS) program. Like OSAM-1, it will demonstrate satellite servicing using a government-developed servicing payload installed on a commercial satellite bus, in this case one provided by Northrop Grumman.

“They look very similar, but they couldn’t be more different in terms of their orbits, their approach to servicing operations they’re doing, and also their approach to execution of the program,” said Joe Parrish, manager of RSGS at DARPA, comparing his program with OSAM-1 during another conference session. Besides different technologies, RSGS is being done as a public-private partnership with the intent of having Northrop’s satellite servicing subsidiary, SpaceLogistics, operate the spacecraft “for fun and profit” by servicing 20 to 30 satellites over a lifetime of 8 to 10 years.

Other government agencies are taking a wait-and-see approach. “NASA has decided that OSAM is a thing, it is a priority,” said Byron Knight, chief scientist at the NRO, at the conference. “We’re not sure that there’s a pony in here somewhere for us.”

NRO is interested in potential capabilities, he said, which is why he’s working with Tomek on the OSAM National Initiative. That could include servicing satellites or assembling large apertures for future NRO reconnaissance satellites.

But, he noted, the NRO is less likely to experiment with OSAM technologies, relying instead on agencies like NASA to demonstrate the technology. “We like having a partner that is courageous enough to try that,” he said. “We’re not that courageous. We like stuff we can grab on to and hold on to.”