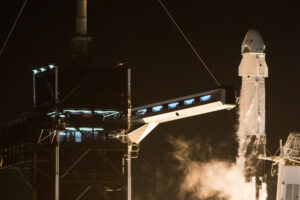 NASA said Jan. 29 that it set a launch date of April 20 for the Crew-2 mission to the station. NASA astronauts Shane Kimbrough and Megan McArthur will be the commander and pilor, respectively, with Japan Aerospace Exploration Agency astronaut Akihiko Hoshide and European Space Agency Thomas Pesquet on board as mission specialists.

The four will replace the Crew-1 astronauts who flew to the station in November on the first operational Crew Dragon mission. NASA astronauts Michael Hopkins, Victor Glover and Shannon Walker, and JAXA astronaut Soichi Noguchi, will return in that spacecraft in late April or early May, assuming Crew-2 launches on its current schedule.

NASA earlier announced a no-earlier-than launch date for Crew-2 of March 30. However, it delayed the mission to allow the uncrewed Orbital Flight Test 2 mission by Boeing’s CST-100 Starliner commercial crew vehicle to launch no earlier than March 25 for an approximately one-week mission. Both Starliner and Crew Dragon dock to one of two ports on the station, one of which is occupied by the Crew-1 Crew Dragon spacecraft.

The delay to April 20 also accommodates a Soyuz spacecraft, Soyuz MS-18, scheduled to launch around April 10. It will bring three Russian cosmonauts to the station, with Soyuz MS-17 returning to Earth a week later with Russian cosmonauts Sergey Ryzhikov and Sergey Kud-Sverchkov, and NASA astronaut Kate Rubins, on board.

“Around the mid-March timeframe we’ll really start to ramp up our preparations for doing some visiting vehicle operations,” Kenny Todd, deputy manager of the ISS program at NASA, said during a Jan. 22 briefing about an upcoming series of spacewalks at the station.

At the briefing he didn’t give a schedule for those missions. “We are still working with our Russian colleagues as well as the Commercial Crew Program to firm up the schedules for the Soyuz 64S and Crew-2 flights,” he said in a Jan. 27 statement to SpaceNews, using the NASA designation for Soyuz MS-18. “Both flights are currently targeting spring 2021, but specific launch dates have yet to be finalized.”

Two of the Crew-1 astronauts, Hopkins and Glover, performed the first in a series of spacewalks Jan. 27, working on the exterior of the Columbus module to support the Bartolomeo external payload platform and to install a new communications antenna there. A second spacewalk on Feb. 1 will complete the installation of a new battery for the station’s power system.

Another pair of spacewalks is tentatively planned for late February or early March, Todd said at the briefing. Those would take place after the arrival of a Cygnus cargo spacecraft currently scheduled for launch Feb. 20.