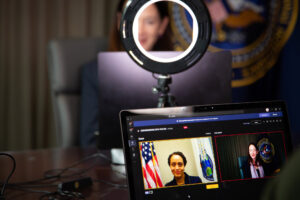 WASHINGTON — The United States is in a “great power competition” and the National Geospatial Intelligence Agency is being challenged to provide faster and better products and services, the agency’s deputy director Stacey Dixon said March 2.

To speed up innovation, NGA wants to expand its supplier base and bring more entrepreneurs and academics into the fold, officials said at the NGA Industry Strategy Summit 2021, a virtual conference watched by a large audience of agency employees and contractors.

“We’re asking for your help to help us reimagine the geoint enterprise,” said Dixon. “We need to be able to deliver at the speed of mission need.”

A component of the U.S. intelligence community, NGA provides satellite imagery and other geospatial data to the U.S. military, allies and homeland security agencies.

NGA last year launched an innovation strategy it calls “moonshot” to convey the message that the United States is in a geoint arms race and that a concerted effort is needed to win.

“Moonshot for us is way more than a buzzword,” said Dixon. “It all started because of a need to focus on the reemergence of great power competition. We need to think big not only as an agency, but as this larger community, as an enterprise.”

Dixon said this vision is going to drive investments and acquisitions in the coming years.

None of the officials who spoke at the NGA conference mentioned any countries by name. But the moonshot metaphor, which evokes President John F. Kennedy’s call to beat the Soviet Union in the space race, seems to be about staying ahead of China in geospatial technology and big-data capabilities.

Phillip Chudoba, NGA’s associate director for capabilities, said the agency needs new approaches for handling big data, for delivering information to customers faster, and has to change how its develops and acquires software.

“We need automation” to manage the ever growing flow of data, he said. NGA is also pushing for “maximum interoperability” between the agency and geospatial data contractors. “We are not interested in proprietary software,” said Chudoba.

Military users of geoint need actionable intelligence, he said. “We have to make the shift from looking at data to predictive analysis” and find ways to integrate intelligence into information systems used by the military services.

“Anticipatory analytics is what gives us an advantage,” Chudoba said. “We are remaining laser focused on maintaining and expanding that competitive edge that we’ve enjoyed for so many years now.”

NGA’s vision of an enterprise means having government, industry and academia working together, he said. With this in mind, NGA is modernizing its IT infrastructure at its main headquarters in Springfield, Virginia, and it’s building a modern campus in St. Louis, Missouri, with high-tech facilities where people can collaborate at different classification levels. This will allow greater participation of contractors and academics who don’t have secret security clearances.

The “NGA West” facility in St. Louis will be a “configurable multi security domain building where industry and academia can work with government,” he said. An initial design proposal has been completed, he added. “It’s being engineered with the future in mind.”