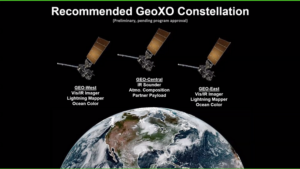 In addition, to operating satellites in orbits similar to those of the current GOES East and GOES West satellites, NOAA recommends placing a third spacecraft over the center of the United States, Pam Sullivan, GOES-R system program director, said Jan. 11 at the virtual American Meteorological Society meeting.

NOAA previously considered adding a high-inclination Tundra orbit to the constellation it is designing to replace GOES-R, which it calls the new constellation Geostationary and Extended Orbits (Geo-XO).

“We did look at Tundra as an option,” said Dan Lindsey, research scientist in NOAA’s Center for Satellite Applications and Research. “We looked at the value and we looked at the cost. The value and cost didn’t quite make the cut.”

While the existing geostationary satellites are limited in their ability to survey higher latitudes, NOAA gathers valuable data on the region with polar-orbiting satellites.

“Currently NOAA has two satellites in polar orbit and if Suomi NPP holds up there may be three,” William Sjoberg, NOAA Joint Polar Satellite System senior systems engineer, said in the chat box during the Geo-XO discussion at the American Meteorological Society conference. In addition, he noted that Europe’s Eumetsat, Japan and other countries share data they gather with polar orbiters. “A Tundra orbit is of real value, but may have to wait,” Sjoberg said.

NOAA is considering working with Canadian agencies to obtain space-based observations of the Arctic. “That’s in discussion right now but is not determined,” Sullivan said.

In fact, none of this is final. “We are just at the start of Geo-XO,” Sullivan said. “We have many gates to go through before we call this official.”

Still, the agency has defined its observational priorities for Geo-XO after spending the last year conducting workshops, conference discussions and surveying hundreds of its data customers.

In addition to continuing to obtain imagery and lightning observations from geostationary orbit like the GOES-R satellites, NOAA officials are recommending adding instruments to the Geo-XO constellation to monitor air quality and ocean color.

The ocean color instruments would fly on the GEO-East and GEO-West satellites with visible and infrared imagers and lightning mappers. The atmospheric composition sensor is baselined for the GEO-Center satellite alongside a hyperspectral infrared sounder and a third partner payload that has not yet been selected.

The overall lifecycle cost of the Geo-XO constellation is likely to be similar to the $12 billion NOAA will spend on the entire GOES-R program from initial planning that began in 2001 to final operations scheduled for 2035.

“The approximate investment that would be needed for the Geo-XO constellation is that GOES-R $12 billion number inflated to the Geo-XO timeframe,” Sullivan said.