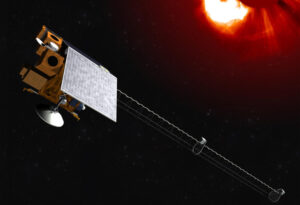 Under the five-year, cost-plus contract, Melbourne, Florida-based L3Harris will develop, deploy and operate a command and control system for NOAA’s Space Weather Follow On-Lagrange 1 observatory, scheduled to launch in 2025 on NASA’s Interstellar Mapping and Acceleration Probe. L3Harris also will provide operations support for the space weather observatory for up to two years.

The new command and control system will be an extension of the existing Geostationary Operational Environmental Satellite (GOES) – R Series Core Ground System, according to a Feb. 5 NOAA news release. L3Harris is the prime contractor for the GOES-R Series ground segment.

The new contract will be managed by the NOAA Satellite and Information Service’s Office of Projects, Planning and Analysis. L3Harris plans to perform work at its Melbourne, Florida, headquarters and to install equipment at NOAA’s Satellite Operations Facility in Suitland, Maryland; NOAA’s Wallops Command and Data Acquisition Station in Wallops, Virginia; and at NOAA’s Consolidated Backup Facility (CBU) in Fairmont, West Virginia.

“These data are critical to support monitoring and timely forecasts of space weather events that have the potential to adversely impact elements vital to national security and economic prosperity, including telecommunication and navigation, satellite systems and the power grid,” according to the NOAA news release.

Space Weather Follow On-L1 is a joint NOAA-NASA program. NASA is acquiring the satellite and launch services. NOAA, meanwhile, is responsible for the ground segment including the acquisition, development, testing and integration of the command and control system.