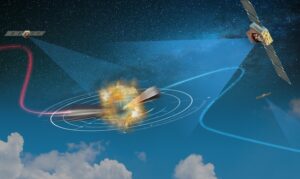 WASHINGTON — Northrop Grumman and L3Harris were selected by the Defense Department’s Missile Defense Agency to each build a prototype sensor satellite capable of tracking hypersonic and ballistic missiles.

Northrop Grumman’s and L3Harris’ designs were selected from a field of four competitors. The Missile Defense Agency in October 2019 awarded Northrop Grumman, Raytheon, Leidos and L3Harris each $20 million contracts to design space sensors for the program known as the Hypersonic and Ballistic Tracking Space Sensor (HBTSS).

The two winners have to deliver prototype satellites by July 2023.

The satellites will be deployed in low-Earth orbit to test the capabilities of the sensors to track hypersonic and dim upper-stage ballistic missiles. These so-called medium-field-of-view sensors are capable of producing “fire control” data needed to be able to target an interceptor weapon to shoot down the enemy missile.

Both the Missile Defense Agency and the Space Development Agency are expected to buy hundreds more satellites to eventually provide global coverage.

The HBTSS and the Tracking Layer programs are pieces of what the U.S. Space Force calls an “overhead persistent infrared” architecture of satellites in low and high orbits that provide early warning of missile launches, detect the location of an incoming missile and send the location data to an interceptor missile that would try to shoot it down.