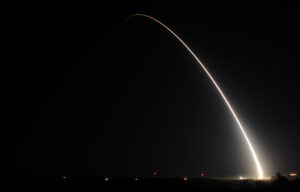 The review took place in November, two months after the Air Force awarded Northrop Grumman a $13.3 billion contract to develop the Ground Based Strategic Deterrent. The GBSD is the follow-on to the Minuteman 3 ICBM that has been in service since 1970.

Northrop Grumman said the Air Force approved the company’s plan for the engineering and manufacturing of GBSD which is also the first step in transitioning ownership of program data to the government. The review was a three-day event held virtually with more than 100 people.

The Air Force and Northrop Grumman are using a digital engineering approach to develop the three-stage solid-fueled GBSD. This allows the government and the contractors to work collaboratively in a virtual environment, a departure from traditional programs where the workflow is not integrated.

According to current plans, Northrop Grumman has to deliver a new ICBM by 2029. ICBMs make up the ground-based portion of the nation’s nuclear forces.

Because of its huge price tag — projected to reach $100 billion over the next decade — the GBSD program could come under scrutiny in the next round of Pentagon budget reviews. Critics have argued that the Pentagon could continue to modernize the Minuteman 3 to save money but the Air Force has insisted that the aging missiles cannot be kept in service much longer.

The Biden administration intends to conduct a review of U.S. nuclear forces and the outcome could determine the long-term future of GBSD. “There will be a relook, as there is in every administration, at the various aspects of nuclear policy and modernization. I think that’s appropriate. The Trump administration did that as well,” said Deputy Defense Secretary Kathleen Hicks during her confirmation hearing Feb. 2.

Northrop Grumman’s CEO Kathy Warden told analysts in a Jan. 28 earnings call that GBSD is “the most recent addition to our diverse portfolio of multi-decade, multibillion-dollar franchise programs.”

Warden said the company’s space business “will continue to be our fastest growing sector based on GBSD and the planned recapitalization of our nation’s space assets.” The GBSD program is projected to generate $800 million to $900 million in annual revenue for Northrop Grumman.