Northrop Grumman was the only bidder for GBSD after Boeing decided to drop out of the competition.
SpaceNews 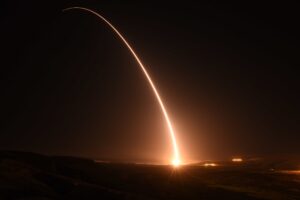 WASHINGTON — The Department of the Air Force on Sept. 8 awarded Northrop Grumman a $13.3 billion contract to develop the Ground Based Strategic Deterrent (GBSD) intercontinental ballistic missile.

The GBSD is the follow-on to the Minuteman 3 ICBM that first became operational in 1970.

“Modernizing the nuclear strategic triad is a top priority of our military,” Defense Secretary Mark Esper said in a statement.  “It’s key to our nation’s defense.”

The Air Force plans to deploy the GBSD beginning in the late 2020s.

In the absence of other competitors, Northrop Grumman received a sole-source contract. The $13.3 billion development phase is expected to run about eight years. The entire GBSD program is projected to be worth up to $63 billion over 20 years.

The Air Force confirmed in December that Northrop Grumman was the only bidder for GBSD after Boeing decided to drop out of the competition. Boeing said Northrop Grumman’s dominance of the solid rocket motors market gave it an overwhelming pricing advantage it could not compete against.

Boeing said in a statement Sept. 8 that  the company “supports the U.S. Air Force and its efforts to modernize the nation’s intercontinental ballistic missile force. We remain ready and willing to assist in the modernization of our land-based strategic deterrent.”