Northrop Grumman statement: “We have chosen not to continue development of the OmegA launch system at this time.”
SpaceNews 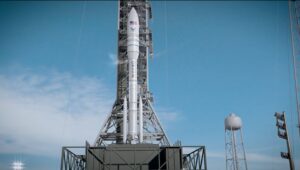 WASHINGTON — Northrop Grumman announced it will not move forward with the development of the OmegA rocket. The vehicle was designed for the sole purpose of competing for a National Security Space Launch contract award but didn’t make the cut.

“We have chosen not to continue development of the OmegA launch system at this time,” Northrop Grumman spokeswoman Jennifer Bowman said in a statement. “We look forward to continuing to play a key role in National Security Space Launch missions and leveraging our OmegA investments in other activities across our business.”

Bowman said the company will not be protesting the U.S. Space Force’s decision to select United Launch Alliance and SpaceX for the NSSL contracts.

The solid-propulsion OmegA was an underdog in the competition.

Without OmegA in the picture, Northrop Grumman still will have plenty of customers for its solid rocket motors. It will supply solid boosters to United Launch Alliance for its Vulcan Centaur rocket. It also has a contract to produce heavy-lift boosters for NASA’s Space Launch System.

Northrop Grumman on Tuesday won its biggest contract yet for solid rocket motors: a $13.3 billion Air Force contract for the Ground Base Strategic Deterrent, a new intercontinental ballistic missile.