Northrop Grumman statement: “We will determine next steps once the debriefing process concludes.”
SpaceNews 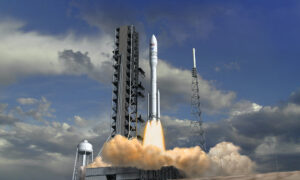 WASHINGTON — When Northrop Grumman unveiled its OmegA rocket in April 2018, the company was clear that it developed the vehicle for the sole purpose of challenging United Launch Alliance and SpaceX for national security space launch contracts.

The Air Force decided to stick with ULA and SpaceX to provide launch services from 2022 to 2027. Without a significant commercial business to fall back on, OmegA does not appear to have a future.

But Northrop Grumman says no final decisions will be made until after the Air Force briefs the company on the reasons why the vehicle was not selected.

“The post-award debriefing process currently is underway, and we are learning more about the U.S. Space Force’s evaluation decisions,” Northrop Grumman spokeswoman Jennifer Bowman told SpaceNews Aug. 21. “We will determine next steps once the debriefing process concludes,” she said. “We are very proud of our OmegA designs and the value that OmegA can provide to the U.S. Space Force and other customers.”

Ars Technica reporter Eric Berger on Thursday tweeted that Northrop Grumman had informed employees earlier this week that it was not moving forward with OmegA. The company declined to comment or confirm this.

The Air Force had been co-investing in the solid-propulsion OmegA since 2018 under a $792 million six-year agreement. That funding will be terminated because the vehicle did not win a launch services contract. The Air Force, however, said the timing for ending the agreement and other issues have yet to be negotiated.

“We have to determine what work has been done and what rights to the data the government has. We want to make sure we retain those,” Assistant Secretary of the Air Force for Acquisition Will Roper said Aug. 7.

In the months prior to the Air Force’s selection, Northrop Grumman officials said OmegA was on track for its first flight in 2021. The company in December announced it had signed up its first customer, the startup Saturn Satellite Networks, to launch a small geostationary communications satellite.

During a July 30 earnings call with analysts , Northrop Grumman CEO Kathy Warden was asked about the future of OmegA if it did not win an Air Force launch services contract.

“If we are not successful, we would continue to leverage that investment,” Warden said.

She said the investment in OmegA for national security space launch “was a way to share our research and development investments across the product line that we can now utilize for other endeavors.”

If OmegA goes out of business, Northrop Grumman still will have plenty of customers for its solid rocket motors. It will supply solid boosters to United Launch Alliance for its Vulcan Centaur rocket. It also has a contract to produce heavy-lift boosters for NASA’s Space Launch System.

Northrop Grumman’s biggest contract for solid rocket motors will be for the Air Force’s Ground Base Strategic Deterrent, a new intercontinental ballistic missile. The Air Force plans to award the GBSD contract this fall.