A report by the National Science Foundation estimates it will cost up to $50 million to clean up the damage from the collapsed Arecibo radio telescope, but that it is still too soon to determine whether or how to rebuild the famous observatory.
SpaceNews 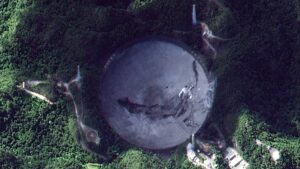 WASHINGTON — A report by the National Science Foundation estimates it will cost up to $50 million to clean up the damage from the collapsed Arecibo radio telescope, but that it is still too soon to determine whether or how to rebuild the famous observatory.

The NSF released March 5 a seven-page report it submitted to Congress in response to language in the fiscal year 2021 appropriations bill enacted in December. That bill asked for a report within 60 days about the cause of the collapse of the 305-meter radio telescope and future plans for the site.

The report largely summarized what it had previously stated about damage the telescope sustained in August and November 2020, leading the agency to decide that a controlled demolition of the historic telescope was the best option. However, before that work began, the observing platform suspended above the disk broke free from one of the three towers supporting it, and crashed to the dish below.

NSF said that the debris from the collapse was contained within hazard zones established by engineers after an earlier cable break in November. The observing platform and its instruments “are a complete loss for scientific purposes,” the report concluded, with damage to the dish and the three support towers. “Damage beyond the main 305-m dish and support structures was limited,” it stated, with some buildings suffering damage from falling debris that should be reparable.

The investigation into the collapse is ongoing, and the report to Congress provided few new details about it. Initial findings from two engineering firms working on the investigation are expected by the end of the current fiscal year in September, with a final report in December. NSF has also asked the National Academies for “an expedited independent study” of the collapse, but didn’t give a schedule for that work.

Work is underway to clean up debris from the site as well as any necessary environmental remediation. NSF said it estimates cleanup costs to be between $30 million and $50 million, spread over fiscal years 2021 and 2022. The report didn’t state how it would pay for those costs, which are several times the annual operating expenses of the observatory.

Congress asked NSF, as part of the report, to discuss “the process for determining whether to establish comparable technology at the site, along with any associated cost estimates.” The NSF responded that there are “many technologies and more than a dozen distinct capabilities” at the site, including a smaller 12-meter radio telescope and ionospheric instruments that are operational.

However, the NSF neither endorsed rebuilding the main 305-meter telescope nor estimated the cost for doing so. “NSF’s process for establishing any significant new scientific facility relies on priorities established by the scientific community and rigorous peer review of the intellectual merit and broader impacts of the proposed activity,” the report stated. That included the decadal survey for astrophysics, whose latest report is expected to be released this spring.

NSF added that it is planning a “community workshop” in April to discuss potential options for the site. “The development costs of potential projects coming out of this stakeholder engagement are unknown,” it stated.

There is at least one proposal, backed by Arecibo Observatory itself, to construct a new radio astronomy facility there. The Next Generation Arecibo Telescope, as outlined in a white paper published last month, would replace the single 305-meter dish with a tightly packed array of smaller dishes, between 9 and 15 meters across, with an equivalent diameter of 300 meters. Those dishes would be placed on a “tilt-able, plate-like structure” at the site. The white paper offered a rough cost estimate of about $450 million for the new telescope.

NASA was not involved in either the NSF report or the white paper about a proposed replacement, but is keeping tabs on the status of the telescope. NASA paid part of Arecibo’s operating costs, using the telescope as a planetary radar for studying solar system objects, notably near Earth asteroids.

“We’re not directly involved with the recovery and cleanup of the site, but we’re tracking with them closely and want to be involved in what the future of the Arecibo Observatory can be,” Lindley Johnson, head of NASA’s Planetary Defense Coordination Office, said of his office’s coordination with NSF at a March 1 meeting of NASA’s Planetary Science Advisory Committee.

“We are in discussions with ideas of what might be done for future planetary radar,” he said. That includes talks with the U.S. Space Force about how such radars could be used to support space situational awareness, an opportunity that backers of the Next Generation Arecibo Telescope have also proposed. “Talks are beginning, but nothing specific has been put forward yet.”