The NSF announced Nov. 19 it will perform a “controlled decommissioning” of the giant radio telescope at the Arecibo Observatory in Puerto Rico, citing recent damage that made it unsafe to operate or even repair.
SpaceNews 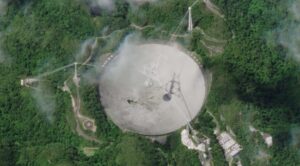 WASHINGTON — The National Science Foundation announced Nov. 19 it will perform a “controlled decommissioning” of the giant radio telescope at the Arecibo Observatory in Puerto Rico, citing recent damage that made it unsafe to operate or even repair.

In a call with reporters, NSF officials said two broken cables used to support a 900-ton platform suspended over the telescope’s 305-meter main dish put the entire structure at risk of collapse. One cable slipped out of its socket in August, falling to the dish below and damaging it, while the second broke Nov. 6

Both cables are attached to the same tower, one of three surrounding the main dish. “The engineers have advised us that the break of one more cable will result in an uncontrolled collapse of the structure,” said Ralph Gaume, director of the NSF’s Division of Astronomical Sciences, referring to cables attached to that same tower. That would result in the platform crashing down to the main dish and potentially toppling one or more of the towers.

Engineers advising the NSF and the University of Central Florida (UCF), which operates Arecibo for the NSF, concluded that it was not possible to safely repair the structure because of the collapse risk. “After the recent failure, WSP does not recommend allowing personnel on the platform or the towers, or anywhere in their immediate physical vicinity in case of potential sudden structural failure,” stated WSP, one engineering firm involved in that analysis, in a Nov. 11 letter to UCF.

“NSF has concluded that this recent damage to the 305-meter telescope cannot be addressed without risking the lives and safety of work crews and staff, and NSF has decided to begin the process of planning for a controlled decommissioning of the 305-meter telescope,” said Sean Jones, assistant director of the NSF’s Mathematical and Physical Sciences Directorate.

One engineering firm did recommend the use of explosives to demolish parts of the telescope. “We believe the structure will collapse in the near future if left untouched,” said a Nov. 12 report by Thornton Tomasetti to UCF. “Controlled demolition, designed with a specific collapse sequence determined and implemented with the use of explosives, will reduce the uncertainty and danger associated with collapse.”

NSF officials also declined to speculate on the cost of decommissioning the telescope, saying they would work with the White House Office of Management and Budget and Congress on how to pay for it. A 2016 environmental assessment prepared by the NSF, developed as part of efforts by the agency to divest itself of older astronomical observatories, estimated deconstruction costs of $10.6 million to $18.7 million, depending on which structures were abandoned in place versus completely removed. Gaume cautioned that those estimates are several years old and would need to be revisited as part of the decommissioning planning.

“While we are saddened by the loss of the facility, we commend [NSF Director] Dr. Sethuraman Panchanathan and his team for prioritizing the lives and safety of observatory staff and repair crews throughout this process,” Reps. Eddie Bernice Johnson (D-Texas) and Frank Lucas (R-Okla.), chair and ranking member, respectively, of the House Science Committee, said in a statement. The encouraged the NSF to continue to use the observatory for educational outreach and “to explore opportunities to use the site for exciting new science in the future.”

Engineers are still studying why the two cables broke. The first cable was one of set of auxiliary cables installed in the 1990s to reinforce the observing platform. The second was one of the main cables dating back to the observatory’s construction in the early 1960s. That main cable broke despite being subject to stresses of just 62% of its rated strength.

The unexpected main cable break led engineers to conclude all of the other cables are at similar risk of failure. Ashley Zauderer, program director for Arecibo at NSF, said the cables had been maintained according to plan throughout the history of the observatory, and inspections after a series of earthquakes less than a year ago “did not report any unusual findings.” She said that the main cables, made in the 1950s and 1960s, “were designed in such a way that it was hard, even with regular maintenance such as painting, to keep moisture and other things from seeping in.”

After the initial auxiliary cable broke, the observatory had been working on a repair and stabilization plan that included installing a more modern monitoring system that could have caught issues with the main cables. “It is truly unfortunate that this main cable failed before we had a chance to get things stabilized,” she said.

Decommissioning of the telescope is not the same as completely closing the entire Arecibo Observatory, NSF officials said. A lidar there used for atmospheric studies will remain, as well as a visitors’ center. The decommissioning process will seek to preserve buildings used for observatory operations that are located at the base of one of the towers.

However, the decommissioning of the radio telescope is a blow to both astronomers and planetary scientists, who used the telescope for a wide range of research. NASA funded part of Arecibo’s operations, using the telescope as a planetary radar to track and characterize near Earth objects as part of its planetary defense program.

In a statement, NASA said it was not involved in the NSF’s decision, but was kept informed along with other stakeholders, and provided the NSF with some engineering support. “NASA respects the National Science Foundation’s decision to put the safety of those who work, visit, and study at the historic observatory above all else,” it stated.

NASA said that it will rely on the Goldstone Observatory in California for future planetary radar observations. NASA recently brought that facility back to full operations after installing a new klystron for that radar.

Arecibo was the largest radio telescope in the world from the time it was built in the early 1960s until the completion of China’s Five Hundred Meter Aperture Spherical Telescope, or FAST, in 2016. It became part of popular culture through appearances in movies such as Contact and GoldenEye.