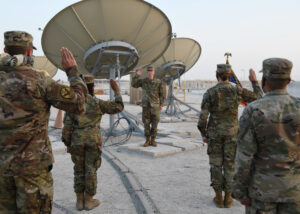 The bill passed the House and Senate Dec. 21 and is awaiting President Trump’s signature.

This is the first defense appropriations bill that has separate funding lines for Space Force operations and maintenance, procurement and RDT&E (research, development, testing and evaluation). Space Force military and civilian personnel funding remains in the U.S. Air Force’s budget. The Space Force is an independent service under the Department of the Air Force.

Up until now the Air Force had to transfer money from the the Air Force to the Space Force for each program line, which can be a “bureaucratic nightmare,” said Todd Harrison, defense budget analyst at the Center for Strategic and International Studies.

He said the Space Force has not yet requested a separate military personnel budget. “So in total, DoD got what it asked for in FY21 in terms of creating separate accounts for the Space Force’s funding,” Harrison told SpaceNews.

The spending bill funds the federal government through Sept. 30, 2021. Space Force funding includes $2.4 billion for operations and maintenance, $2.3 billion for procurement and $10.5 billion for RDT&E.

Compared to the Pentagon’s budget request, Congress slightly reduced Space Force procurement from $2.4 billion to $2.3 billion but increased RDT&E from $10.3 billion to $10.5 billion.

In the National Security Space Launch program, Congress cut the procurement request from $1.04 billion to $996 million. The reduction was made based on estimated “contract savings” made in the NSSL Phase 2 launch services procurement, according to congressional justification documents.

The RDT&E portion of National Security Space Launch was cut from $560 million to $550 million. Congress removed $100 million — money that the Air Force no longer has to pay to Northrop Grumman and Blue Origin for Launch Service Agreement contracts that are being terminated. But lawmakers added back $90 million to fund new programs — $15 million for next-generation engine tests and $75 million for upper stage resiliency enhancements.

Congress also added $15 million for “tactically responsive launch,” a program for which the Pentagon did not request any money.

The coronavirus bill extends through March 2021 the so-called Section 3610 authority Congress passed in March that allows the Pentagon to reimburse contractors for pandemic-related expenses and to pay companies for work that is behind schedule due to the pandemic.

The president and CEO of the Aerospace Industries Association Eric Fanning said the extension of Section 3610 gives the industry a much needed lifeline so “aerospace and defense employees can continue to access their worksites and support vital NASA and national security programs.”