OneWeb announced Nov. 20 that its sale to an ownership group led by Bharti Global and the British government has closed, allowing the company to emerge from Chapter 11 bankruptcy with a new chief executive.
SpaceNews 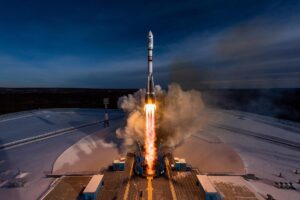 WASHINGTON — OneWeb announced Nov. 20 that its sale to an ownership group led by Bharti Global and the British government has closed, allowing the company to emerge from Chapter 11 bankruptcy with a new chief executive.

OneWeb said it had completed “all relevant regulatory approvals,” allowing the sale of the company to exit Chapter 11 bankruptcy. Bharti Global and the British government each own 42.2% of the broadband satellite constellation company, with most the rest owned by SoftBank and Hughes Network Systems.

The completion of sale comes with a change in leadership at the company. OneWeb said that Neil Masterson will take over as chief executive, replacing Adrian Steckel. Masterson comes from outside the space and telecommunications industries, having spent the last 20 years at Thomson Reuters, most recently as co-chief operating officer.

“I am looking forward to helping the OneWeb team deliver and commercialize their vision to provide internet access across the globe,” Masterson said in a company statement. “OneWeb has a strong social purpose to improve the world’s access to information, which I share.”

Steckel, who had been chief executive of OneWeb since September 2018, will remain as an adviser to the company’s board.

Bharti Global and the British government made a winning bid of $1 billion for OneWeb in July, and a U.S. federal bankruptcy court approved the sale Oct. 2. The company has since then been securing final approvals, such as one by the Federal Communications Commission Oct. 27 to transfer OneWeb’s satellite and ground station licenses to the company’s new owners.

At a Nov. 18 webinar, Ruth Pritchard-Kelly, vice president for regulatory affairs at OneWeb, predicted that the company would emerge from Chapter 11 “any day now” as it wrapped up the remaining paperwork. “Almost every t has been crossed and every i has been dotted,” she said. “Any day now, there will be a final announcement.”

The British government argued that the acquisition of OneWeb fit into a broader strategy to grow the country’s space industry. “This strategic investment demonstrates Government’s commitment to the U.K.’s space sector in the long-term and our ambition to put Britain at the cutting edge of the latest advances in space technology,” U.K. Business Secretary Alok Sharma said in a statement.

For Bharti Global, an Indian telecom company, the deal offers it an opportunity to leverage billions invested by the company’s original stakeholders. “Together with our U.K. Government partner, we recognized that OneWeb has valuable global spectrum with priority rights, and we benefit from $3.3 billion invested to date and from the satellites already in orbit, securing our usage rights,” said Sunil Bharti Mittal, founder and chairman of Bharti Global, in that statement.

OneWeb also confirmed that it will resume satellite launches with a Dec. 17 launch of 36 satellites on a Soyuz rocket from the Vostochny Cosmodrome in Russia. The company expects to have its full constellation of about 650 satellites in orbit by the end of 2022, with initial service in Arctic regions starting by late 2021.