Broadband satellite company OneWeb announced Jan. 15 it has raised $400 million from SoftBank and Hughes Network Systems, allowing the company to continue deployment of its constellation.
SpaceNews 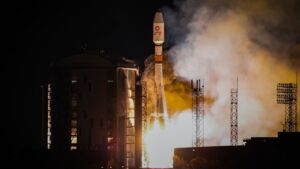 WASHINGTON — Broadband satellite company OneWeb announced Jan. 15 it has raised $400 million from SoftBank and Hughes Network Systems, allowing the company to continue deployment of its constellation.

The new round includes $350 million from SoftBank, who was the biggest shareholder in OneWeb before it filed for Chapter 11 bankruptcy in March 2020. The remainder is from Hughes Network Systems, which announced last year it would invest $50 million into the restructured company.

The companies did not disclose the new size of SoftBank’s stake in the company, but OneWeb announced that the Japanese company would get a seat on its board. According to an October notice by the Federal Communications Commission, SoftBank owned 12.3% of the company at the time, after owning 37.41% before the Chapter 11 filing.

The same FCC notice said that Hughes’ planned investment was still being finalized, but that the investment would not have a “meaningful impact” on OneWeb’s ownership, with Hughes holding a 2.6% stake. The British government and Indian telecom company Bharti Global, which acquired OneWeb for $1 billion, each owned 42.2% of the company at that time.

The funding will help support the company as it continues deployment of an initial constellation of 648 satellites. “We have made rapid progress to restart the business since emerging from Chapter 11 in November,” said Neil Masterson, chief executive of OneWeb, in a statement. “We welcome the investments by SoftBank and Hughes as further proof of progress towards delivering our goal.”

OneWeb said the funding “positions the company to be fully funded for its first-generation satellite fleet,” but the $400 million alone is insufficient to fund the company through full deployment of the constellation, expected to be completed in mid-2022. Sunil Bharti Mittal, founder and chairman of Bharti Enterprises and executive chairman of OneWeb, said last month he expected OneWeb would need $2.5 billion to complete the constellation, of which about half had been raised. That suggests the company still needs to raise about $1 billion.

Bharti Mittal, though, was optimistic about getting that additional funding. “I don’t see raising capital for this wonderful project for the balance amount to be any issue,” he said, noting that Bharti Enterprises had raised more than $12 billion in the last 18–24 months for other projects.

OneWeb said last month that they expected to perform launches on a roughly monthly schedule to complete the constellation, with enough satellites in orbit by the fall of 2021 to enable service to begin at latitudes above 50 degrees north. Global service would begin in 2022, once the full constellation is in orbit.

OneWeb resumed launches of that constellation, halted by the Chapter 11 filing, Dec. 18, with the deployment of 36 satellites on a Soyuz rocket. The company has not announced a date for its next launch.

In addition to that initial constellation, the company is working on a larger “Phase Two” constellation. In a Jan. 12 filing with the FCC, OneWeb sought to modify its original application by reducing the number of satellites in that Phase Two system from 47,844 to 6,372.