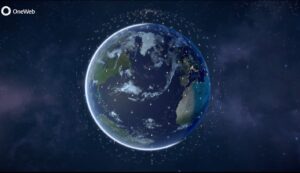 During a Washington Space Business Roundtable webinar, Ruth Pritchard-Kelly, vice president for regulatory affairs at OneWeb, said the company was wrapping up paperwork to allow it to formally exit the bankruptcy protection it filed for in March. A federal court approved last month the sale of the company to an ownership group led by Bharti Global and the British government.

“This new ownership is poised to take over any day now,” she said. “Almost every t has been crossed and every i has been dotted. Any day now, there will be a final announcement.”

Since the Oct. 2 decision by a federal court approving the sale, OneWeb has been wrapping up paperwork to close the sale and formally exit Chapter 11. That included an Oct. 27 approval by the Federal Communications Commission to transfer OneWeb’s satellite and ground station licenses to its new owners.

OneWeb is preparing to resume satellite launches. The company this week flew a set of 36 satellites from its factory near the Kennedy Space Center in Florida to the Vostochny Cosmodrome in Russia. Those satellites will launch on a Soyuz rocket there in December as part of a revised launch contract with Arianespace announced in September.

The company has 74 satellites in orbit, all of which are fully operational, Pritchard-Kelly said. The company anticipates completing its initial 650-satellite constellation in 2022 through the 16 Soyuz launches it has under contract with Arianespace.

That deployment will allow the company to provide coverage over Arctic regions, which she defined as north of 50 degrees latitude, by the end of 2021. “We are talking with all of the Arctic nations about what we can offer them in the form of alpha and beta trials and demos and tests,” she said. OneWeb believes there will be strong demand from isolated communities with poor connectivity today.

The company’s approach, she said, is to support other service providers. “We are going to be the backbone that local operators use to finally provide universal service,” she said. “We will invite them to use us as their cellular backhaul, as their last mile, as the way they connect.”

OneWeb filed for Chapter 11 bankruptcy in March because it could not raise the funding it needed to complete the system, a shortfall Pritchard-Kelly said was triggered by the pandemic. “Our original largest shareholders took a brutal beating in the collapse of the stock market that happened in early March, and they pulled back,” she said. “They pulled back to their essential business, which was not OneWeb.”

The pandemic, though, made the case for broadband connectivity that OneWeb can provide. “It proved the business case,” she said. People who left cities for rural areas during the onset of the pandemic discovered how difficult it was to remain connected. “They realized how important it is to have 4G everywhere in the world. Being remote should not mean being disconnected.”