Satellite operators believe direct-to-home television broadcasting will continue to be a strong business globally despite weakness in the United States and, to a lesser extent, Europe.
SpaceNews 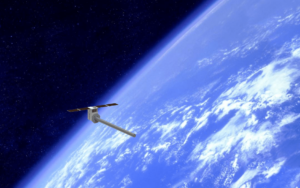 Satellite operators believe direct-to-home television broadcasting will continue to be a strong business globally despite weakness in the United States and, to a lesser extent, Europe. Emerging markets are driving demand for satellite capacity to broadcast television channels, with an emphasis on content in local languages. Broadband connections, which can open the floodgates for terrestrial “over-the-top” video streaming services, remain too expensive in many emerging markets to take significant numbers of customers from satellite operators. Emerging markets are slowing down, however, with fewer new direct-to-home platforms launching in recent years, and some new platforms failing to gain customers. [Via Satellite]

A cubesat Viasat is building for the U.S. Air Force Research Laboratory is scheduled to launch in the spring of 2021. The 23-kilogram satellite will use a 12U spacecraft bus from Blue Canyon Technologies and an L-band antenna from Roccor. Viasat is supplying a payload that uses Link-16, an encrypted radio frequency employed by military forces for line-of-sight communications. The Viasat satellite will test Link-16 communications from space. The satellite has a design life of six months, and will support demonstrations for the Marine Corps and Special Operations Command in addition to the Air Force Research Laboratory. [Viasat]

Satellite connectivity startup Kepler Communications will launch two cubesats on a Soyuz rocket arranged through German rideshare specialist Exolaunch. The mission is scheduled for September with the two satellites, each of which will carry a Ku-band payload for high-capacity communications and a prototype narrowband payload to connect sensors and devices with limited data needs. Exolaunch developed a customized EXOpod deployer for Kepler’s “6U XL” cubesats, which are slightly larger than normal 6U cubesats. [SpaceNews/Exolaunch]

Eutelsat has decided not to buy a new C-band satellite to serve the U.S. market.The company said Monday that, as part of the FCC’s C-band spectrum clearing effort, it will move customers onto three existing satellites rather than buy a new satellite as previously planned. That move stands in contrast to Intelsat and SES, which each ordered six new satellites after the FCC promised the expense would be reimbursed. Eutelsat used its revised plan as an opportunity to launch a thinly veiled criticism of SES and Intelsat’s transition plans, calling them out of step with FCC requirements to perform the transition in “a careful, fair, and cost-effective manner.” [SpaceNews]

Arabsat announced Tuesday it is ordering a new geostationary communications satellite from Airbus Defence and Space. The Badr-8 satellite is expected to launch in 2023 to provide C- and Ku-band coverage over Europe, the Middle East and Central Asia. Airbus Defence and Space will build the satellite using Eurostar Neo, an all-electric platform designed with support from the French, British and European space agencies. Arabsat said it plans to spend $300 million on the manufacture, launch, insurance and ground infrastructure for Badr-8. [SpaceNews]

Satellite communications provider Speedcast seeks to exit Chapter 11 bankruptcy through a sale to one of its largest debt holders. Private investment management firm Centerbridge Partners offered $395 million to acquire all of the reorganized company. Centerbridge appears to have gained control of the majority of the company’s debt, alongside Black Diamond Capital Management, another financial institution, through debt trading during the bankruptcy proceeding. The Australian company filed for bankruptcy protection in April as the coronavirus pandemic weakened demand for its connectivity services to cruise lines, oil rigs and other customers. [SpaceNews]

Swedish satellite communications company Ovzon generated 94.6 million Swedish krona $10.9 million) in revenue for the first six months of 2020, down 13.5% from the same period last year. The lack of trade shows and conferences this year because of the coronavirus pandemic has complicated sales efforts, the company said. A smaller Defense Department contract also lightened Ovzon’s revenue. Ovzon said it signed a new contract with the Defense Department in July at a higher rate that accounts for newly leased steerable capacity on the Intelsat-39 satellite. Ovzon’s first self-owned satellite, Ovzon-3, is scheduled to launch in the second half of 2021 on an Ariane 5 rocket. [Ovzon]

Satellite communications startup Skylo is partnering with Sony Semiconductor Israel to develop chipsets for internet-of-things (IoT) services. Skylo emerged from stealth mode in January with $116 million in the bank and plans to offer an inexpensive way for devices, machines and sensors to transmit data over existing geostationary communications satellites. Skylo and Sony say they will be the first firms to deploy cellular IoT chipsets based on narrowband IoT protocols established to work with 5G networks. Skylo plans to begin offering communications services later this year in South Asia. [SpaceNews]

Satellite antenna company Kymeta is acquiring satellite services specialist Lepton Global Solutions. Kymeta says the deal deepens its expertise in offering communications services to U.S. government agencies that have expressed interest in purchasing services rather than just hardware. Lepton will become a wholly owned Kymeta subsidiary. Kymeta, known for producing electronically steered flat-panel antennas, says its next-generation Kymeta u8 antenna is scheduled to begin beta-testing this month and go on sale in the fourth quarter of this year. [SpaceNews]