A disregard for terrestrial international norms has also been witnessed with regard to space.
SpaceNews 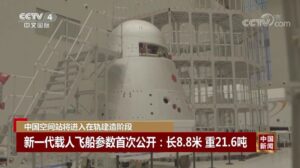 Whether the issue is trade, pandemic response, or outer space, the United States expects China to accept Western norms of behavior.

In the South China Sea, Beijing has tried to literally change the facts on the ground in order to reinforce its claims. This has led to the most massive land reclamation effort in the Spratlys, as well as various confrontations with Vietnam, the Philippines and other claimants. As important, China has sought to limit American naval activity in the South China Sea.

China is laying claim to a region through which $5.3 trillion of trade traverses annually.

With regard to COVID-19, it seems clear at this point that China’s government chose not to inform the World Health Organization of the existence of a new disease, despite obligations under the International Health Regulations. Even more troubling, the country’s leaders chose not to cooperate with either the U.S. Centers for Disease Control or the WHO in the early stages of the outbreak, costing the world vital days and weeks of potential response time.

In all these cases, China concluded that control, of the population of Hong Kong, of the waters of the South China Sea, and of information regarding COVID-19, are more important than any international obligations.

This disregard for terrestrial international norms has also been witnessed with regard to space. Reports began to emerge in 2016 that China’s Tiangong-1, its first space laboratory, was no longer under control, and that its eventual reentry might not be controlled.

Chinese officials as late as January 2018 insisted, however, that the spacecraft was under control. Zhu Congpeng, a top Chinese space engineer, declared that “It will burn up on entering the atmosphere and the remaining wreckage will fall into a designated area of the sea, without endangering the surface.” As it turned out, Tiangong-1 was not under control, and the Chinese did not have the ability to control its final descent, much less make it enter a designated area. Indeed, the mission planners announced that they had ended all communications with the craft in 2016, and had apparently not reserved some fuel to guide its final trajectory.

The situation appears to have been repeated earlier this year. The Chinese successfully launched the Long March-5B, an improved variant of the Long March-5 heavy boost vehicle. Unlike the previous Long March 5, however, the 5B mates the Long March’s core with four strap-on boosters rather than have a second stage. Consequently, after deploying its payload, the core, weighing some 20,000 kilograms or 22 tons, underwent an uncontrolled reentry. This was the largest uncontrolled reentering object since Salyut-7 in 1991.

Parts of the booster, most likely the YF-77 engines as well as large metal rods, reportedly landed in Cote d’Ivoire. The craft had previously overflown Los Angeles and New York City.

That China would be so cavalier about reentering objects, after the furor of its 2007 anti-satellite test — the largest debris-generating event in the space age — suggests that belief in China’s concerns about international criticism may be overblown. Indeed, it is far more likely that Beijing has taken the global pulse and concluded that international criticism is easily weathered.

As disturbing, China has demonstrated that it will strive to circumvent or twist other nations’ laws in order to access key technologies, including space technologies.

The case of Global IP, an American company which had arranged to purchase a Boeing satellite, is a prime example. As documented by the Wall Street Journal, Chinese investors funneled hundreds of millions of dollars to Global IP, enough to allow them to appoint several members to the company’s board — while not acquiring the company, which would have triggered a U.S. government review. From there, the Chinese were then able to access all corporate documentation, including contracts, blueprints, and technical details.

If the rest of the space community expects China to conform with international standards, it is essential that its decision makers be held accountable for actions such as the Long March-5B and Tiangong-1 events. It must be made clear that its attempts to circumvent international norms and rules will not be tolerated. The failure to hold China to international norms is how the South China Sea has now become more tense than ever, with Beijing further encroaching on maritime neighbors such as Indonesia.

Far from rewarding such bad behavior as failing to control its reentering space vehicles and failing to inform potential victims, it is essential to make clear that such failures have consequences. Allowing the Chinese to blithely claim that they have a reentering spacecraft under control, only to admit years later that they do not, is unlikely to promote responsible behavior or adherence to norms.

At a minimum, these failures need to be raised diplomatically. But diplomatic protests have had little effect on Chinese behavior over Hong Kong and COVID, and it promises to do little more to improve their space behavior. Claims that the handful of diplomatic demarches following China’s 2007 anti-satellite test somehow dissuaded Beijing were never very credible. The demonstrated behavior of the last several years suggests that any effect they might have has now dissipated.

At least as important will be monitoring China’s efforts to increase their investments in foreign space companies. As outright Chinese ownership of advanced technology companies, including space-related ones, is increasingly challenged across the West, it is likely that Beijing will push the minority ownership approach to gain access to sensitive technologies while nominally not violating export controls or foreign investment oversight.

The Chinese talk about “win-win” in such instances, but it has never been clear who else wins in many of these interactions. Chinese investments in foreign space-related companies provide access to cash, but opens the door to not only their intellectual property but in many cases to key details of contracts and systems.

Dean Cheng is a research fellow for Chinese political and military affairs at the Heritage Foundation.