China this week is conducting a robotic lunar sample return mission, something the United States has never done. The mission is proceeding while a Chinese lunar rover is wrapping up its second year of service on the moon — on its far side, something also never done by the United States.
SpaceNews 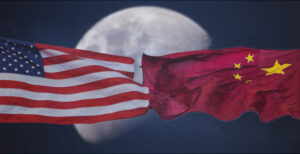 China this week is conducting a robotic lunar sample return mission, something the United States has never done.

The grab-and-go sample return is proceeding while a Chinese lunar rover is wrapping up its second year of service on the moon — on its far side, something also never done by the United States.

Another Chinese rover mission, Tianwen-1, is on its way to Mars and scheduled to land there in February — around the same time NASA’s Mars 2020 rover and the United Arab Emirates’ Hope orbiter are due to reach the red planet.

And China is scheduled to launch the first element of its space station early next year as well.

Beyond? They have described a mission to be launched in 2024 to reach 100 astronomical units (roughly 100 times the distance between the Earth and the sun) in 2049 to commemorate the 100th anniversary of founding of the People’s Republic of China.

It is not a space race; they haven’t challenged the U.S. and we are largely ignoring these developments. They may have a human landing goal, but not until the 2030s. They are proceeding methodically with human spaceflight, focusing on a space station not on the critical path to the moon.

In the meantime, they are also undertaking robotic solar system goals. Why? Surely not for any militaristic or economic goals. It is equally doubtful that understanding lunar and Martian geology or the physics of the interstellar medium is a high strategic priority.

And, as we already know, there is no national security advantage to human spaceflight in Earth orbit, so their space station is not for that. National security comes from automated spacecraft with communications, remote sensing and other robotic capabilities. It seems to me that China is heading to the moon, Mars and beyond because they want to be a great country — leading the world not just in one or two areas but in all areas of science and technology — part of their long-term effort for economic growth.

The change of U.S. presidential administrations in January, U.S. and Chinese robotic Mars landings in February, and the dawning recognition that the U.S. Artemis lunar landing goal is unrealistic creates an opportunity for rethinking America’s human space goals — perhaps redirecting them to serve American national goals instead of merely those of the space industry.

We have only done that twice in all of the space age — once with Apollo to demonstrate American Cold War technological superiority, and then with bringing the Russians into the International Space Station to forestall them selling post-Soviet arms to rogue states. With the incoming administration of U.S. President-elect Joe Biden wanting to bring American foreign policy back from isolation and confrontation, the space program could play a role by engaging China on the creation of an international lunar station, boosting our space program and giving us a benign foreign policy initiative.

Engage China!? That is totally anathema to current American policy and broader attitudes. Probably the only thing the Biden and Trump administrations agree on is being tough on China. And the space community would rather have another space race for its own advantage.

But another space race is not likely, not with all the other competing domestic priorities and it would serve no U.S. strategic goal. The growing Chinese economy is seen as a threat, not as an opportunity. But so far, the U.S. reaction has been defensiveness — to weakly hide behind walls and other barriers, and a lot of hand-wringing. If we want to act strong (but not dangerously), we might try co-option through cooperation. Invite them to play on our field of 350 million people, instead of allowing ourselves to play on their field of 1.4 billion.

Engaging China, given the current policy climate, would be difficult. It would involve dealing with hawks and hard-liners amid a backdrop of contentious issues: notably trade, security and human rights.

The best bet would be to start with something symbolic, as the U.S. and Russia did with the Apollo-Soyuz mission in 1975 and the Shuttle-Mir program in the mid-1990s.

Inviting a taikonaut to the International Space Station would be a harmless gesture that would raise public interest in the ISS. China also might value gaining some ISS experience prior to operating its own space station.

Each nation’s current lunar and Mars programs would continue on their current course, but could be gradually enhanced  with international cooperation while serving the bigger context of human activity on the moon and Mars.

Those expecting commercial development and other private ventures on the moon will find Earth’s nearest neighbor large enough to accommodate lots of interests. China’s presence is not uncertain — they are doing that anyway. The scale and the reality of lunar development can only be enhanced by coordination and cooperation.

The political risks of lunar engagement are small but the potential payoff is large: cooperation on a great venture off this world, increasing mutual understanding on it.

Louis Friedman is the co-founder and executive director emeritus of  The Planetary Society.