The United States should take the lead in initiating a dual-track approach to developing both a Western and an International space traffic management regime in order to prevent China and Russia from normalizing potent anti-satellite capabilities in the name of debris-removal.
SpaceNews 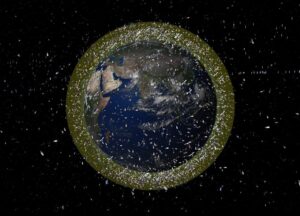 The omnibus spending bill the U.S. Congress enacted in December will provide $10 million in 2021 for the Commerce Department’s Office of Space Commerce to conduct a space traffic management (STM) “pilot program” with other agencies and industries. The program will “develop STM technical prototypes, initiate an open architecture data repository, and perform STM demonstrations and experiments.”

First things first, the United States must decide what approach to use in pursuing an international STM. The traditional negotiation process we are currently following allows China and Russia to share all the benefits of an STM, but to have an incredible bonus of maintaining the option to threaten our satellites at the opening of war. Instead, the United States should take the lead on initiating a dual-track approach that encompasses a Western STM regime and an international STM regime in parallel. Participation in the lucrative Western space market will incentivize China and Russia to join an STM program that provides not only prosperity as the current approach focuses on, but also peace for all countries.

Within the United Nations, the Committee on the Peaceful Uses of Outer Space (COPUOS) takes the lead in space sustainability, defined as “the ability to maintain the conduct of space activities indefinitely into the future.” It will oversee the implementation of the international STM program. Already, it has performed outstanding background work, including the 2018 publication of 21 voluntary guidelines developed over the prior eight years.

A critical requirement for the STM program is the avoidance of collisions between operational satellites and space debris. One fundamental principle for debris mitigation is removal of “spacecraft and orbital stages that have reached the end of their mission operations from the useful densely populated orbit regions.” This critical task of removal calls for the deployment of robotic spacecraft capable of rendezvous and proximity operations (RPOs). These spacecraft will also handle the emerging service requirement of refueling, repairing, upgrading, and relocating functional satellites.

The problem is that these RPO robotic spacecraft can be tasked for malevolent intent. If they can reach and grapple a space object for service, they can do the same to disable another country’s satellites or nudge them out of their orbits. Since they provide essential services to sustain space activities, however, they cannot and should not be banned. Moreover, there is no law or understanding to prohibit any number of spacecraft from getting arbitrarily close to another country’s satellites.

In 2018, COPUOS aimed to resolve this dangerous RPO or proximity threat by proposing voluntary guidelines for “States and international intergovernmental organizations should ensure … that close-proximity space operations … are carried out in conformity with appropriate safety criteria.” Russia, however, blocked the addition of these RPO measures to the 21 aforementioned guidelines. In August 2020, UK tried to change the negotiation tactic for agreement by proposing a UN resolution to “broker an international consensus on responsible behaviour in space.” While “responsible behaviour” has long been the correct driver for rules of the road in space, China and Russia will not consent.

Here is why. They see a rare golden opportunity to exploit RPO spacecraft to add a critical military capability that their other anti-satellite weapons (ASATs) cannot provide. Under the current approach, they can develop and implement this capability with little resistance from the West. They can conceal their dual-use RPO spacecraft tests for ASAT purposes by using their own satellites as surrogate targets. The current way of negotiation will place them in a win-win situation. Without an STM regime, they can revert to the status quo, which “legitimately” allows them to station their spacecraft close to our satellites in peacetime and execute lightning attacks at the opening of war to counterbalance our superior military power in space and on earth. Their tactic in an STM negotiation will be to benefit from the STM program without giving up the option of stalking our satellites at close proximity. The current decision-making-by-consensus rule in COPUOS allows Chinese and Russian refusal of any proposed measure that hinders their preparation and execution of these rapid strikes.

In sum, China and Russia can take advantage of the current negotiating approach to get a terrific deal for them but a lousy one for the United States. If such a negotiation were to lead to a STM regime, it would not be the one we want because it would not prohibit the proximity threat. On the other hand, if no STM program is reached, the same threat would remain. Let’s remember that peace and prosperity are the very reasons we desire an STM program in the first place.

To resolve the proximity threat, we should recognize that STM negotiations through COPUOS and the United Nations alone are necessary but insufficient. The United States should pursue both a Western STM regime and an international STM regime. Decisions concerning the Western STM program will be made by the participating Western states. For the international STM program, all participant nations will have a say, just as in United Nations agreements. The West’s initial negotiating position will propose zones and bodyguards in both STM agreements. While negotiations may compromise in the details of the zones and bodyguard rules, the inclusion of zones and bodyguards will be nonnegotiable, unless a better way to deter and defend attacks on our satellites is offered.

No doubt, China and Russia will reject both STM proposals at the start. Especially when space traffic is growing rapidly from small satellites, the West’s natural response would be to move ahead with its Western STM program, over which China and Russia have no control. From the start, the West must design an STM regime that keeps the peace and creates economic prosperity for all countries. This altruistic pursuit will attract adherents to the Western and international STM agreements. It should be noted that China and Russia are not prevented from doing space business with Western clients — the choice is theirs. However, it is common practice for companies doing business in a foreign country to abide by local regulations and laws. Thus, there is precedent for abiding by traffic rules in the vicinity of Western satellites. In doing so, China and Russia would not enter Western self-defense zones without prior consent.

Once they recognize that the option of threatening us with their robotic spacecraft has been eliminated, participation in the hugely profitable Western space market will become the dominant factor in their strategic calculation and will strongly incentivize them to join the Western STM program. Also, the West will benefit from Chinese and Russian engagement in the Western space market, as their participation will create competition to make Western space firms more innovative and expand their global market share.

After China and Russia acquiesce to the Western STM system, abiding by an international STM system is just a small incremental step since both STM systems will have essentially identical rules. They will likely join.

The dual-track approach is based on the premise that no country should use the STM regime to threaten another country. Once this premise is recognized, all countries will focus on reaching and joining an international STM system that will sow harmony and cooperation and reap peace and prosperity for all countries.

Brian Chow is an independent policy analyst on space and other national security issues. He can be reached at brianchow.sp@gmail.com.