Taken literally, Starlink users must agree with SpaceX that Mars is a “free planet” and that disputes concerning Starlink services provided on Mars or while en route to the red planet via a SpaceX Starship will be settled through self-regulation. But is this clause valid?
SpaceNews 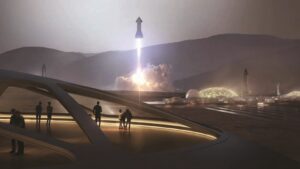 SpaceX makes no secret of its driving goal to make humans a multiplanetary species. Given SpaceX founder Elon Musk’s fixation on Mars and fondness for Tesla ‘Easter eggs’ and other gags, it’s hardly surprising to see Mars mentioned in the terms of service (ToS) agreement for beta users of its Starlink satellite broadband service. However, as a space lawyer, I certainly didn’t expect Starlink’s beta ToS to include the following provision:

“For services provided on Mars, or in transit to Mars via Starship or other colonization spacecraft, the parties recognize Mars as a free planet and that no Earth-based government has authority or sovereignty over Martian activities. Accordingly, Disputes will be settled through self-governing principles, established in good faith at the time of the Martian settlement.”

To be sure, SpaceX might have inserted Clause 9 as another one of Musk’s jokes that aren’t really jokes, like the time he invoked South Park’s infamous underwear gnomes in explaining how he intended to fund his ambitious Mars colonization plans. After all, there are no Starlink satellites orbiting Mars, and no prospective customers there yet, either. But international law is no laughing matter.

Taken literally, Starlink users must agree with SpaceX that Mars is a “free planet” and that disputes concerning Starlink services provided on Mars or while en route to the red planet via a SpaceX Starship — will be settled through self-regulation. But is this clause valid? What are the political implications of a transportation company proclaiming the legal status of a celestial body? Does such an attempt make strategic sense?

From a legal viewpoint, Clause 9 of Starlink’s terms of service should be regarded as void. Simply put, declaring Mars as a “free planet” and refusing any Earth-based authority over Martian activities conflicts with the international obligations of the United States under the Outer Space Treaty, which naturally take precedence over contractual terms of services.

First, under Articles I and III of the treaty, international law applies in outer space, including the moon and other celestial bodies, and influences all activities conducted thereby. Accordingly, Mars cannot be considered a “free planet” left to “self-governing principles” of dubious nature and origin, because it is rather fully subjected to the rule of law.

Further, Starlink’s refusal of Earth-based governmental authority on Mars is in clear violation of Article VIII of the treaty. According to this provision, states “retain jurisdiction and control”over any registered space objects and “any personnel thereof, while in outer space or on a celestial body.”

This principle is known as “quasi-territorial” jurisdiction and serves the purpose of ensuring the applicability of relevant national laws, preventing space from being abandoned to the rule of the strongest.

As an American company, SpaceX is obliged under U.S. law to respect these rules in order to get licenses from the U.S. government to conduct commercial launches and provide satellite services. This is mandated by Article VI of the treaty, according to which nongovernmental activities in space require the “authorization and continuing supervision of the appropriate State,” which is internationally responsible for assuring that these activities “are carried out in conformity with the provisions set forth in the present Treaty.”

As such, any attempt to declare “Mars as a free planet” and reject the authority of “Earth-based government” over Martian activities is in violation of international space law and would consequently bear no legal effect on third parties.

SpaceX’s declaration on the legal status of Mars is not without political implications. Interestingly enough, a thorough look at the first part of Starlink’s terms of service Clause 9 shows that SpaceX doesn’t seem to have problems with “Earth-based authority” regulating lunar activities:

“For Services provided to, on or in orbit around the planet Earth or the Moon, these Terms and any disputes […] will be governed by and construed in accordance with the laws of the State of California in the United States.”

Nevertheless, under international space law there are no grounds to distinguish between the moon and Mars; the same rules apply to “the Moon and other celestial bodies.” Assuming SpaceX knows this, it appears that the company is sending a political message to subvert the status quo and establish a separate regime for Mars.

Now, if SpaceX was merely an internet service provider, the issue would be purely theoretical with no reason for any further concern. However, SpaceX fully intends to send the first humans to Mars. As such, the company’s refusal to respect international law once its en route could put SpaceX’s passengers in real peril. These early passengers would fully depend on SpaceX for their survival en route to Mars and while on the surface, not to mention their prospects for returning to Earth. One the one hand, you have a company that controls the means to survival; on the other hand, you have a group of fragile individuals potentially stranded in an incredibly hostile environment a long, long way from home.

How could SpaceX seriously refer to principles established in “good faith” given such a massive imbalance of power? Politically speaking, declaring Mars a “free planet” would condemn its first inhabitants to the indisputable will of a private corporation — a dangerous situation threatening the fundamental rights of any human traveling with SpaceX.

Truth to be told, any attempt to escape international law on Mars may actually turn out to be strategically counterproductive. First, as any international lawyer knows, the only support for declaring Mars a “free planet” can only come from the applicability of international law, not its denial.

Under Article I (2) of the UN Charter, any independent community of humans enjoys the right to self-determination. If and when SpaceX’s vision of a million people living on Mars becomes a reality, there is no doubt that this community would be entitled to political independence and self-regulation. However, this outcome can neither be imposed in advance nor accomplished against international law. Rather, it can only develop from the natural evolution of the circumstances, under the safeguards of the rule of law.

In the early stages, any Martian settlement will have to rely on Earth’s supplies, technologies, personnel and overall logistical support. Conversely, this dependence will also imply the legitimate exercise of Earth-based authority in order to protect the settlement from degenerating into violence and Wild West types of behaviors.

Later, when the settlement has developed an autonomous structure and a balanced division of powers, then independence and self-regulation would naturally follow — but not a minute before the conditions for protecting fundamental rights are established.

Finally, another reason why SpaceX’s declaration may become counterproductive can be identified by looking at the company’s core business: launching spacecraft for a government-heavy customer base. Openly refusing governmental authority while still depending on governmental contracts is not exactly a smart move; it undermines the credibility of SpaceX as a reliable partner and advantages its competitors.

If a government had to choose between an expensive service from a company pledging allegiance to the rule of law and a cheap one from an enterprise trying to impose “self-governing principles established in good faith,” there is little doubt which one will be awarded a contract. Actually, with such terms of service, SpaceX would not even be authorized to launch its Starships toward Mars in the first place.

There can be no doubts that applying international law on other celestial bodies is the best way to preserve the exploration and use of outer space as the province of all humankind. Space activities, no matter where in the solar system, shall always be conducted under the safeguards of the rule of law. No company should be allowed to question this essential principle in the attempt to turn outer space into a modern Wild West.

SpaceX’s defiance of international law should be taken very seriously and stopped now, before the company is able to push it to the point of establishing its private domain on Mars. The future of space as a peaceful, fair and inclusive domain may very well depend on this.

Antonino Salmeri (@AntoninoSalmeri) is an attorney and doctoral researcher in space law at the University of Luxembourg, where he is pursuing a Ph.D. on space mining enforcement challenges with support from the Luxembourg National Research Fund.