In addition to better preparing us for the next pandemic, or teaching us how to prevent it altogether, reflection also reveals lessons we can apply to other issues we face as a collective society, writes Mike Lindsay.
SpaceNews 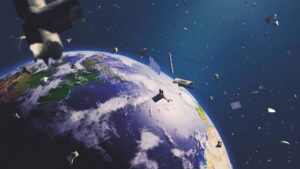 The pandemic of 2020 has brought great loss and suffering, assuredly impacting every human life on the planet in one way or another. While a number of countries appeared to have the virus under control, we are now seeing second surges of cases and can expect to realize the full impact of COVID-19 for many years to come.

To learn and grow from this, we must continue to question and study the factors that made the virus so deadly and difficult to contain. In addition to better preparing us for the next pandemic, or teaching us how to prevent it altogether, this reflection also reveals lessons we can apply to other issues we face as a collective society.

Already we have seen numerous comparisons of the spread of the virus to other global crises such as climate change — the growing issue of space debris also has some significant parallels worth exploring.

While most of us are not epidemiologists, the quarantine period likely provided ample opportunity (for those of us fortunate enough to have avoided the symptoms) to read countless articles educating us about R0, the effectiveness of masks, and of course, the frightening reality of exponential growth. While new data continued to roll in during the early months of the pandemic and countries applied different policies with varying results, the most decisive factor in beating the virus proved to be taking holistic action and doing so quickly.

If there is one take-away about exponential growth, it is that once it starts, it is extremely hard to contain — and this is our first lesson:

Of course, while this seems painfully obvious, we have just witnessed firsthand how this principle invokes a paradox in policy implementation. If the problem doesn’t appear to be out of control, then why take action that comes with certain and severe economic impact? Luckily, seeing the future doesn’t require a crystal ball — it simply requires a respect for science and an understanding of the usefulness of simulations.

Any model that simulated the spread of COVID-19 indicated a grim future if no actions were taken, and yet we still saw resistance to implementing safety measures. Will space suffer the same outcome? Many researchers have painted worrying images of the LEO environment which could result from our current trajectory of leaving defunct satellites in orbit. The emergence of more large constellations has also inspired countless variations of the studies and, fortunately, some forward-leaning regulatory action. However, we still see lagging investment in space sustainability and a reluctance to take holistic measures as an industry. Should we not have the equivalent of pandemic response teams and ventilators at the ready?

Part of the issue perhaps, is a skepticism toward current models out there, which brings us to our next lesson:

2. All models are wrong, but some are useful.

This famous phrase is not meant to cast any doubt on simulation work being done; rather it is meant to do the opposite. We must recognize that not only do input parameters never match reality, but researchers often risk backlash and loss of credibility if pessimistic assumptions or conclusions are singled out and attacked. COVID-19 certainly demonstrated this dynamic in spades. We may expect the space industry to show more respect for appropriate amounts of conservatism, but we are not without our own competitive and capitalistic motivations. In almost all cases, a sustainable tomorrow means additional expense today, which can be a hard pill to swallow (but the key is in understanding that these expenses are actually investments, much like wearing a face mask).

One example of unrealistic optimism in many long-term debris studies is that a single, simulated constellation will operate for a finite time, then one day decommission all of its satellites. The simulation may show that during the operation of said constellation, the environment was negatively impacted, but 150 years later, things are mostly back to normal. One could then conclude that the constellation has a negligible longterm effect on the space environment, and is thus sustainable.

The problem with this model is that it assumes we won’t continue to increase the number of satellites in space, and so the “long-term” analysis paints a positive picture of a false future. We cannot overlook the current growth of the steady state environment we are creating for ourselves right now. Is it safe and sustainable? Does it foster investment and innovation? Or does it look increasingly risky and expensive for everyone involved?

In a bit of a silver lining, the pandemic proved that reducing personal travel and vehicle use results in cleaner air and a healthier ecosystem overall. It is a bit more difficult, however, to take satellites out of the sky for a few centuries while LEO clears itself up. We must therefore invest in space sustainability simultaneously with space development, not after the fact. Unfortunately, this means we have some catching up to do.

Though, in more good news, many operators and institutions are currently engaging in discussions regarding the best practices that will reverse some of the historical damage and ensure a better future. One of these notions, which seems particularly apt this year, is also becoming harder and harder to abide by. It is also our third lesson:

If the reader would excuse the insensitivity of the forthcoming analogy, a catastrophic collision in space that causes new space debris can be likened to a cough from an infected person. Anyone near the cougher is at an increased risk of being hit by particles which could then infect that bystander, eventually causing them to become sick and cough themselves. This chain reaction (remember R0) is exacerbated in populations of people in close proximity, such as those in large cities.

Those of you familiar with space debris discussions probably know where this analogy is going: the dreaded Kessler Syndrome, a chain reaction of space debris events catalyzed by dense deployments of satellites in space.

As we have learned, the R0 factor is decreased by keeping our distance from one another. Constellation operators have recognized this as well, and in some cases have even altered their plans to deploy away from other constellations. OneWeb even named this concept a “safety buffer zone.” LEO is not infinite, however, and sooner or later this satellite social distancing will cease to be possible. Policymakers such as the U.S. Federal Communications Commission recognize this impending issue, but so far have declined to adopt any rules regarding orbital separation. Of course, it is notoriously difficult to tell the difference between too soon and too late when it comes to implementing new policies.

Space is big, yes, but the region in which most satellites operate is limited. We cannot deny that our orbital environment is steadily becoming more crowded. So, what will we do when we can no longer rely on separation for safety? There are many strategies to consider but, to again reference our pandemic lessons-learned, we know that self-isolation is one of the most effective ways to mitigate the risk. A “sick” or broken satellite that cannot move itself to avoid collisions presents a potential debris risk to the others around it. The best way to reduce its risk is to self-isolate, which in GEO means moving to a graveyard orbit, and in LEO means reentering the atmosphere as quickly as possible. Removing potential sources of new space debris will always be one of the most direct and effective ways to ensure a sustainable space environment.

To close this off, we’ll explore a final lesson that we really hope wouldn’t be true for the space industry, but alas we are not there yet.

4. Without regulation, we cannot expect others to consider more than their own immediate self-interest.

Historically, humanity has not been good at taking proactive measures to solve problems. However, we repeatedly see that sustainability is not only good for humanity’s future, it is also good for business. Even if the tangible return on an investment in sustainability is not immediately apparent to everyone, taking steps toward that goal will yield long-term rewards, both financial and environmental. The difficulty, however, is that this knowledge is in constant conflict with the parts of human nature that make us want what we want, when we want it — whether that’s getting a haircut, going to the beach, or launching thousands of new objects into orbit — with minimal appreciation of the risks and long-term consequences. Let’s not wait until the orbital pandemic hits before taking action. The time to take preventive action is now.

Mike Lindsay is chief technology officer at Astroscale. He previously worked for OneWeb, NASA and Google.

This article originally appeared in the Aug. 3, 2020 issue of SpaceNews magazine.