The U.S. Space Force now has the perfect opportunity to revolutionize the military personnel system.
SpaceNews 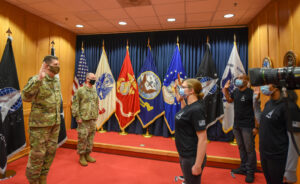 The U.S. Space Force’s Chief of Space Operations Gen. Jay Raymond is taking a “clean sheet approach” to building a new service. One of his most important tasks is recruiting and developing the workforce required to meet the challenges of this ultra-modern domain.

For years, an outdated personnel management system has challenged America’s military ability to recruit and retain talent. This is even more pronounced in technical fields like space. We need a diverse talent pool that better reflects America in 2020.

Military recruiting has become increasingly difficult. Less than 30 percent of U.S. youth are eligible for military service (even fewer for technical jobs), and private sector firms are stiff competition for an already limited talent pool. Even when our best and brightest do join, the services struggle to keep them.

We see these retention struggles in the exodus of military pilots to the airlines or cyber operators to the tech industry. Both examples paint a concerning picture for the future of Space Force personnel. With space poised to become the next trillion-dollar economy, demand for expertise will only climb.

The conditions are perfect for Space Force to revolutionize military personnel management policies. With bipartisan support for the service in both the executive and legislative branches, this is the right time, as the political capital may never be higher. The service’s small size (estimated around 16,000) also provides the agility to implement sweeping personnel changes, quickly evaluate their impacts, and modify as necessary.

Raymond is already building a “21st century human capital management plan.” As efforts continue to develop this new service, here are five areas where reform could pay immediate dividends to attracting and keeping top space talent and set the Space Force as a test bed for the changes needed to maintain our national security advantages.

Space Force should begin by evaluating the standards needed to perform its mission, which it almost exclusively accomplishes outside of traditional combat zones. This requires a hard look at the physical, behavioral and other barriers that currently restrict entry into the services. Some, like education and the ability to possess a security clearance, may become more restrictive. But others, like height, weight, physical fitness, medical history, or appearance (grooming, tattoos, etc.) could be relaxed, instantly broadening the talent pool. This scenario for Space Force is not a lowering of standards, but rather a long overdue reform based on what’s actually needed for mission success.

The military has two fundamental career motivations that cannot be matched: pride of national service and performing duties impossible in the civilian sector. But the DoD has relied on these advantages instead of evolving to balance the needs of both the service and the service members. Space Force must modify the rigid career paths, compensation, and impacts on military families that workers use to evaluate career satisfaction. Some areas of consideration include:

Like the other services, Space Force will benefit from a reserve component but should reevaluate its structure and find a better way to flow between active and reserve status. Transitioning between a reserve component and active duty should be an option for all members as they port their status between military, industry, academia or take a full-time sabbatical for other life priorities. Retired and veteran personnel should have the option to surge back to active duty to fill needs.

Space Force civilian personnel suffer from many of the same talent management shortfalls as their uniformed peers. The civilian system, from recruitment and retention to training and education, needs an overhaul. Experimenting with reform efforts in pay and career progression for a small, technical service like the Space Force could empower a new generation of civilian employees and yield lasting impacts that could be scaled appropriately across the services.

The service should also review the roles and responsibilities of civilian versus military. Key warfighting functions will always need uniformed members. But many space missions are supportive in nature (GPS, communications, weather, etc.), and space systems are increasingly automating. This creates a more ideal setting to evaluate which duties could be transitioned to civilians, creating greater stability and continuity and freeing limited military manpower for areas of true need.

Finally, to attract the best talent in America, the Space Force must look like America, opening opportunities for people from all communities and backgrounds. For example, we can rethink physical standards by keeping different cultural norms in mind or create flexibility for families that increases gender diversity in our ranks. We should also go beyond typical markets for recruiting, ensuring we reach various and diverse communities. To his credit, Raymond has mandated that Space Force leaders “embrace diversity and inclusion as a key element of readiness and lethality.” He named a chief diversity and inclusion officer, and the Department of the Air Force just announced its new Office of Diversity, Inclusion, and Belonging.

Reforming Pentagon human resources practices won’t be easy. Tack on healthy congressional scrutiny and constant media attention, and the task is formidable. But the standup of Space Force provides a generational opportunity. And the lessons learned could be scaled across the defense enterprise. As adversaries advance their space programs and talent initiatives, now is the time to revolutionize our approach to this new and challenging domain – all while ensuring our military continues to recruit and retain the best and brightest.

Eric Fanning is president and CEO of the Aerospace Industries Association, representing more than 300 companies in the aerospace and defense sector. He previously served as the 22nd Secretary of the Army and the Acting Secretary of the Air Force.