The PROSWIFT Act is a major step forward in developing a coordinated national space weather plan. But fully realizing the act’s objectives will require a commensurate appropriation of funds to ensure the necessary advances in our understanding of the sun.
SpaceNews 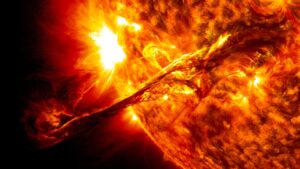 On Oct. 21, 2020, the Promoting Research and Observations of Space Weather to Improve the Forecasting of Tomorrow (PROSWIFT) Act was signed into law. This act culminates a multiyear bipartisan effort championed by Sens. Gary Peters (D-Mich.) and Cory Gardner (R-Colo.), and Reps. Ed Perlmutter (D-Colo.) and Mo Brooks (R-Ala.). It directs government agencies (including NOAA, NASA, NSF, and the Department of Defense), as well as academia, the commercial sector, and international partners, to coordinate efforts to predict “space weather” events and mitigate their impact. The PROSWIFT Act is a major step forward in developing a coordinated national space weather plan. But to fully realize the objectives in this authorizing legislation, and so protect humanity from potentially devastating space weather events, will require a commensurate appropriation of funds to ensure the necessary advances in our understanding of the sun.

Our world is increasingly and irrevocably reliant on a complex system of ground-based and space-based technology infrastructure. Yet this infrastructure exists on a planet immersed in a cloud of million-degree gas originating at the sun, and so is at a constant threat from the effects of space weather. Space weather consists of streams of energetic particles, intense ultraviolet and x-ray radiation, and magnetic disturbances, constantly bombarding our planet. Like terrestrial weather, it’s usually mild but can occasionally turn nasty. A rare, large space weather event releases more energy than 10,000 Category 5 hurricanes. It can send billions of tons of material hurtling through space at millions of miles per hour – sometimes right at Earth.

The effects of such a drastic disturbance in the near-Earth space environment include billions of dollars of damage to our communications and power distribution architectures; interruption of GPS services; radiation exposure for passengers and crew on aircraft; and deadly radiation doses for astronauts in Earth orbit and on the moon. In 1989, a geomagnetic space weather storm unleashed by the sun caused much of the Canadian province of Quebec to lose electric power for hours. In 2012, a solar eruption that would have wreaked economic havoc 20 times worse than Hurricane Katrina missed Earth by just a week. Think of the catastrophe of such an event in the midst of the current COVID-19 pandemic, as unprecedented numbers of people depend on the very technologies that are at risk from space weather to enable remote learning, work, and health treatment.

The PROSWIFT Act places considerable emphasis on the importance of research into the underlying causes of space weather. Just like hurricane prediction requires satellite imagery and in situ measurements coupled with an understanding of atmospheric dynamics, space weather prediction relies on observations from ground- and space-based observatories coupled with a deep understanding of the physics of the sun and near-Earth space. This fundamental science discipline – “heliophysics” – is interwoven with all things space: planetary science, astrophysics, and Earth science.

The passage of the PROSWIFT Act is an important milestone for science and for our nation’s security. It summons the United States to muster its considerable resources to lead and protect society from potentially devastating space weather events. On behalf of the membership of the scientific societies we represent – the Space Physics and Aeronomy Section of the American Geophysical Union and the Solar Physics Division of the American Astronomical Society — we call upon the White House Office of Management and Budget and the White House Office of Science and Technology Policy to request, and Congress to support, robust funding levels for heliophysics research and space weather infrastructure. As this pandemic has highlighted, our personal lives, national security, and economy are all at risk without such an investment.