America’s future in space depends on lunar industrial development.  It is the prerequisite for human exploration and settlement of Mars.
SpaceNews 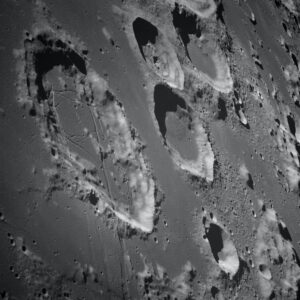 As the nation looks ahead to a new U.S. presidential administration and the new decade, few decisions will have a more profound impact on the future of our nation, and potentially the world, than the direction of the U.S. space program.

America’s current focus on development of the moon is often depicted as inhibiting human exploration of Mars. Different administrations, different Congresses, have pushed one or the other, through visionary plans, research programs and soaring rhetoric. But there is a fundamental truth that will shape our extraterrestrial planning:  the next “gold rush” will be for lunar resources to enable an energy rich economy in Earth-moon space.  This new wealth will make the human exploration and settlement of more distant Mars practical.

To get to Mars, we must first develop the moon.

Our moon is the most valuable undeveloped real estate in the solar system.  Believed to be made of parts of the Earth that coalesced from the debris of a primordial collision with a large celestial object, it is rich in minerals from Earth and from billions of years of impacts from asteroids.   With no atmosphere, resulting in a near perfect vacuum, an unattenuated supply of solar power, and just one-sixth the force of gravity of Earth, the moon makes an ideal location for the efficient production and manufacturing of all the things one needs to develop cislunar space and extend human reach to Mars.

The technology exists to separate moon soil – called regolith – into all the elements necessary to live and build in space:  oxygen, silicon, iron, aluminum, titanium, calcium, magnesium and a variety of rare earth elements. These are the basic building blocks needed to manufacture habitats, derive fuel for spacecraft, build spacecraft components, and even fabricate microelectronics – for lunar development, settlement of Mars, human exploration of the solar system and eventually beyond.  We at Lunar Resources have developed a process to extract the wealth of pure oxygen, metals and silicon from the regolith that is the common component of the lunar surface.  Moreover, the moon’s vacuum provides efficiencies and purities in production of materials that far exceed capabilities on Earth allowing for the industrial scale production of ultra-high quality materials able to be utilized for space exploration.

Why not send these materials directly from Earth to Mars?  The cost and size limitations of shipping from Earth are simply prohibitive.  Yet, it takes 10 times less energy to launch from the moon than from the much more massive Earth.  Thus, to enable transportation to Mars, economics will favor propellants from moon over those from Earth. The economics of lunar resources is even more compelling when we consider the maintenance of a lunar settlement.  Only about 1.4 percent of the Saturn V launch mass was payload landed on the surface of the moon. Why incur the incredibly high cost of shipping pre-manufactured materials from Earth, when they can be made better and cheaper right on the moon.  High-capacity shuttles designed not for escaping Earth’s gravity but for moon-Mars shipping refueled from depots in lunar orbit, would make development of the Martian ecosystem practical, in less time, and at less cost.

America’s future in space depends on lunar industrial development.  It is the prerequisite for human exploration and settlement of Mars and can provide the unlimited supply of resources to build an energy rich, vibrant space economy.  Lunar Resources and other companies have the technology and are ready to begin turning regolith into the building blocks of our future space economy – within the next five years.

This is possible if the next Congress and the new aministration keep the moon as our focus with an emphasis on near-term investment to create an industrial and scientific complex on the moon as a springboard for America’s space program.