One of the challenges ahead for the Space Force is educating new members of Congress and the public on why space matters and what threats exist on orbit.
SpaceNews 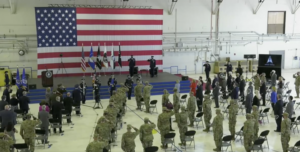 The U.S. Space Force on Dec. 20 marks its first birthday. The service overall has moved forward at remarkable speed organizing a brand-new military branch — something that hasn’t been done in over 70 years. As it begins its second year, there are many unknowns such as how the Biden-Harris administration will treat national security space and the Space Force.

One of the challenges ahead for the Space Force is educating new members of Congress, as well as the American public, on why space matters and what threats exist on orbit. Russia and China are clearly our competitors. They are developing their own space-based and space-enabled capabilities not only to exploit space for themselves, but also to deny our freedom of movement on orbit. This goes to the heart of the need for the service, its mission, and the importance of resourcing it accordingly.

This means going beyond Space Force officers talking to space professionals alone. It means connecting with the American people about the importance of space for their lives and their prosperity. Americans’ daily lives rely on space capabilities more than any other country and the consequences of losing those is nothing less than the fundamental disruption of our national and economic security.

Second, the Space Force must bring a sense of urgency, speed, purpose and vision to its acquisition programs. The Space Enterprise Consortium, Space Pitch Days (which the author participated in), AFWERX (and the recently announced SpaceWERX) and other rapid acquisition programs are showing that when it wants to, government can go fast. These reforms have been applied to small-dollar programs, but not to the core programs of record such as exquisite school bus-size satellites. How effective the newly announced Space Systems Command will be remains to be seen.

This is not about just getting the same things faster. Shaving off a few months of an acquisition cycle is laudable, but doesn’t really help us confront Beijing or Moscow. To truly change the way we operate on orbit, we must change what we buy, and how we buy it. The next generation is here today: small satellites, global high-speed broadband, flight proven rockets, dedicated rideshare, repurposed upper stages, and more. The Space Force must be positioned not only to take advantage of these capabilities, but also to guide and shape America’s presence throughout near-earth orbit and beyond.

This is perhaps even more important when one looks ahead to post-COVID budgets and pressures to shift military spending to domestic priorities. Here, you may see that drive for acquisition reform aiming to secure more for less and faster.

Finally, the service can help drive the creation of an American-led, rules-based order in space. Not the service’s burden alone, its posture, capability, and orientation make it a prime mover. Here, the incoming administration must work with America’s allies and partners, and within international institutions, to define what this order in space should be. Space should be a global commons based on liberal, democratic values. Failing cedes the initiative to China or anarchy on orbit—neither serves our interests.

The incoming administration can drive a needed whole-of-government approach. The Space Force must work with the Department of State to define rules and norms, including space debris mitigation; with the Department of Transportation for launch approval and space traffic management; and with NASA and others on a unified approach to space. The Space Force must redefine its relationship with the private sector to be a partner, but not the sole partner. It needs to define needed future capabilities, buy commercially where possible, invest where opportunities exist, and focus on in-housing those unique, bespoke capabilities only the government needs.

Over the course of 2020, the Space Force accomplished a lot. It stood up its organization structure of “deltas” in lieu of Air Force “wings”, it enlisted its first trainees, carried out multiple national security space launches, and rolled out its spacepower capstone document. The service released the Chief of Space Operations’ planning guidance, outlining Gen. John “Jay” Raymond’s vision for the Space Force. It also found itself in a strange battle with William Shatner (aka Captain Kirk) over the use of naval ranks.

The next year need not and should not be the “terrible-twos” for the Space Force. It is an opportunity to build on the progress achieved in 2020 and move ahead with the task of defining its future.

Joshua Huminski is director of the Mike Rogers Center for Intelligence and Global Affairs’ National Security Space Program at the Center for the Study of the Presidency & Congress.