President Biden should reestablish the National Space Council. Doing so would keep space issues on the radar of our nation’s highest officials and encourage the coordination necessary to solve problems that cut across multiple federal agencies.
SpaceNews 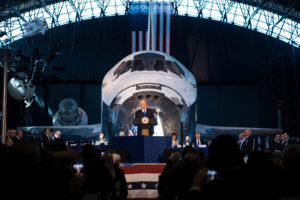 NASA marked another milestone last week with the successful landing of the Perseverance rover on Mars. Perseverance is now the fifth and most technologically advanced rover to reach the surface of the red planet.

Perseverance’s main objectives are to search Mars for signs of ancient life and collect soil samples that will eventually be brought back to Earth. Yet the mission will also have broader implications for space policy. The discovery of ancient life, for example, could influence policy regarding planetary protection, future human missions, and international norms for exploration. The fact that Perseverance could be joined by a Chinese rover later this year highlights the growing space competition between the U.S. and strategic rivals.

The United States needs a whole-of-government approach to address these and other emerging issues in the space domain. This does not require the creation of a new bureaucracy. Instead, President Biden should reestablish the National Space Council, which has proved highly successful. Doing so would keep space issues on the radar of our nation’s highest officials and encourage the coordination necessary to solve problems that cut across multiple federal agencies.

Federal law requires a National Space Council to be chaired by the Vice President and to include the heads of seven departments and agencies, including the Secretaries of Defense, Transportation, and Commerce, and the NASA Administrator. Any principal with a role in space would have a seat at the table — even the Secretaries of Energy and Homeland Security. Such high-level focus on space is necessary given its growing importance to our economy and national security. The global space economy amounts to $400 billion today and is expected to reach $3 trillion by 2040. American companies are leading the way in cutting-edge space industries ranging from in-space manufacturing to on-orbit satellite servicing. Restoring the National Space Council would keep government focused on ways to maintain America’s edge in space while providing a forum for industry leaders and researchers to engage with policymakers.

Beyond its economic significance, space has emerged as a critical domain in national security, prompting Congress to establish the Space Force in 2019. Common security interests have also encouraged the rise of “space diplomacy,” exemplified by last year’s Artemis Accords between NASA and nine other nations. These bilateral accords established a set of principles rooted in the Outer Space Treaty to ensure all nations can benefit from the peaceful use of space. As space takes on new geopolitical dimensions, agency leaders need to understand how emerging space threats connect to their unique areas of responsibility.

The National Space Council would be intentionally diverse, with membership cutting across military, civil, and commercial lines. This diversity would aid the creation of holistic space policies that anticipate multiple dimensions of impact. For example, space policy should reflect the fact that communications satellites serve military, civil, and commercial customers. The same holds true for weather and imaging satellites. Emerging technologies pose additional complexities as many of them, like on-orbit servicing, are inherently dual-use: a “space tug” could move an adversary’s satellite just as easily as it could a commercial one. Such wide-ranging realities require a diverse range of expertise on the National Space Council to craft smart and suitable policies.

Too often, bureaucracy has stymied the interagency collaboration needed to develop sound policy affecting diverse sectors. The previous administration overcame this paralysis by reassembling the National Space Council. Rather than making policy at the “least common denominator,” the National Space Council showed that elevating decision-making above mid-level interagency committees can yield groundbreaking policy outcomes. To take just one example, Space Policy Directive-3 ended the long-running debate over which agency should handle commercial space situational awareness activities. Today, that is clearly the turf of the Department of Commerce. In a similar manner, Space Policy Directive-6 outlined a national strategy for harnessing nuclear power in space that set clear roles and responsibilities for NASA, the Department of Energy, and the Department of Defense.

Space policy is too important to be delegated to mid-level interagency groups who lack the authority to make difficult and consequential decisions. The ever-expanding space domain requires the attention of the President’s appointees. The Biden Administration should reenlist the proven success of the National Space Council.