NASA’s OSIRIS-REx spacecraft briefly touched down on the surface of the asteroid Bennu Oct. 20, but it may be several days before project scientists know how much material the probe collected for return to Earth.
SpaceNews 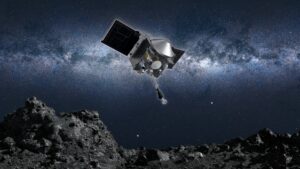 WASHINGTON — NASA’s OSIRIS-REx spacecraft briefly touched down on the surface of the asteroid Bennu Oct. 20, but it may be several days before project scientists know how much material the probe collected for return to Earth.

A sampling arm extended from the OSIRIS-REx spacecraft touched down in a crater called Nightingale on the surface of Bennu at 6:12 p.m. Eastern. The Touch-and-Go Sample Acquisition Mechanism (TAGSAM) was on the surface for several seconds before the spacecraft backed away from the asteroid as planned.

The approach appeared to go as planned. “Everything went just exactly perfect,” Dante Lauretta, principal investigator for OSIRIS-REx at the University of Arizona, said on NASA TV immediately after the sampling attempt. “The spacecraft appears to have operated flawlessly.”

During its brief time on the surface, TAGSAM, similar in appearance to a car air filter, fired a burst of nitrogen gas to kick up fine material on the surface, trapping that material inside the device. The mission’s goal is to collect at least 60 grams of material, although TAGSAM could collect as much as two kilograms.

It will be some time, though, before the project team knows how much material it collected. The spacecraft provided only low-rate telemetry during its approach to and immediately departure from the surface of Bennu. Once the spacecraft is back to a safe distance from the asteroid, it will start returning images and other data collected during the touch-and-go, or TAG, maneuver.

Lauretta said he’s particularly interested in the images taken of the surface during the sampling attempt. “We’re going to be looking at a whole series of images as we descended down to the surface, made contact and fired that gas bottle,” he said. “I really want to know how that surface responded.”

If the location where OSIRIS-REx touched down was relatively sandy, the burst of nitrogen gas should have disturbed it. “If TAG made a significant disturbance of the surface, we likely collected a lot of material,” said Mike Moreau, OSIRIS-REx deputy project manager at NASA’s Goddard Space Flight Center.

It will be several more days, though, before the team has a better estimate of the amount of material collected, which they plan to measure by slowly spinning the spacecraft and measuring the difference in its moment of inertia from before the sampling attempt. That should provide an estimate of the amount of material collected with an accuracy of a few tens of grams, Lauretta said at a briefing about the sampling attempt in September.

If the sampling effort failed, or fell short of the goal of 60 grams, the mission does have the ability to perform a second sampling attempt. That will likely be at a backup site, dubbed Osprey, elsewhere on the asteroid.

Finding a sampling site on Bennu turned out to be much harder than the mission expected. Observations of Bennu taken before OSIRIS-REx arrived in late 2018 suggested that the surface was generally sandy, but images from the spacecraft showed a much rockier surface, littered with boulders that would interfere with a sampling attempt. Engineers spent months developing new control software to enable a more precise approach required to reach the smaller target sampling areas on the asteroid’s surface.

The spacecraft will depart the vicinity of Bennu in March 2021, returning the samples to Earth in a canister that will land in the Utah desert in September 2023. Those samples will then be studied by scientists in labs using instruments far more capable than those that can be flown on spacecraft.

“Sample return is an important strategy for NASA and for planetary science,” said Lori Glaze, director of NASA’s planetary science division, at a briefing last month. “On Earth, we can apply the full breadth of our terrestrial science laboratory capabilities to study the physical and the chemical characteristics of these pristine, unaltered materials in our state-of-the-art laboratories.”

OSIRIS-REx, formally known as the Origins, Spectral Interpretation, Resource Identification, Security-Regolith Explorer, launched in September 2016 as the third mission in the New Frontiers line of medium-sized planetary science missions, after the New Horizons mission to Pluto and the Juno mission to Jupiter. The mission’s total estimated cost is $1.16 billion.