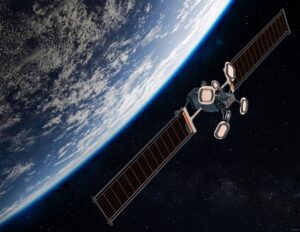 In heavy rain, Ovzon transferred data to and from a Blackhawk helicopter through a steerable satellite beam at speeds of 17 megabits per second, a daunting feat given the obstruction caused by the precipitation and spinning rotors.

With that data speed, “a helicopter all of a sudden can be used as a management platform or command platform for civil or military government operations” because it can send and receive high-definition video, and simultaneous videoconferences, Ovzon CEO Magnus René said in an interview.

To date, Ovzon has offered global communications coverage by leasing capacity from fleet operators including Intelsat and Hispasat. Ovzon is preparing to launch its first custom-built satellite in 2021 to offer coverage over one-third of the Earth’s surface. The company’s ultimate goal is to expand its fleet “to have global reach with our own satellites” and to offer “super-high capacity in small areas,” René said.

Ovzon ordered its first satellite in 2018 from Maxar Technologies and signed an agreement with Arianespace in 2019 to launch the satellite called Ovzon-3 in the fourth quarter of 2021 on an Ariane 5 rocket.

The Ovzon-3 satellite, which Maxar is building on a Legion-class bus, is small compared with traditional geostationary communications satellites. Weighing in at about 1,500 kilograms, Ovzon-3 is equipped with steerable high-energy beams and Ovzon’s proprietary “On Board Processor to facilitate communications directly from the satellite to small terminals,” René said.

In September, Ovzon selected Paris-based Eutelsat Communications to control Ovzon-3 throughout its lifetime. Ovzon will operate the satellite from its Network Operations Center.

“We did consider controlling the satellite ourselves but to do this for one satellite is a big undertaking and there are a number of operators that are happy to handle that for companies like ourselves,” René said.

In spite of the COVID-19 pandemic, Ovzon has noticed little change in its business, which is focused primarily on serving government customers. The U.S. Defense department has been Ovzon’s largest customer for seven or eight years, René said.