The European Space Agency announced Feb. 16 that its first call for new astronauts in more than a decade will be open to candidates with physical disabilities.
SpaceNews 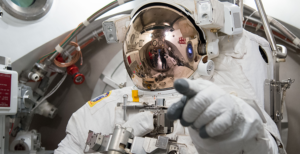 JOHANNESBURG — The European Space Agency announced Feb. 16 that its first call for new astronauts in more than a decade will be open to candidates with physical disabilities.

During a briefing with reporters, ESA officials said the agency plans to recruit four to six career astronauts and a pool of approximately 20 reserve astronauts, a first for ESA. Additionally, in another first for the agency, outgoing ESA Director General Jan Wörner announced that it is looking to recruit its first “parastronaut.”

ESA said it aims to select a parastronaut from among a pool of candidates deemed psychologically, cognitively, technically and professionally qualified but who have a physical disability that would normally prevent them from being selected due to requirement imposed by current space hardware.

“Visible representation is always important and so therefore we’ve been asking ourselves, what are the barriers preventing us from flying a physically disabled astronaut to the ISS,” Wörner said.

ESA expects to recruit one parastronaut as part of its astronaut reserves, according to David Parker, ESA’s director of human and robotic exploration

“There are many unknowns ahead of us, the only promise we can make today is one of a serious, dedicated and honest attempt to clear the path to space for an astronaut with disability,” ESA said in a statement.

In parallel to selecting astronaut candidates with disabilities, ESA said it will work with crew vehicle providers and its international partners “to identify potential adaptations to eventually enable an astronaut with disability to fly to space.”

ESA said it expects the “parastronaut feasibility project” to “open an opportunity of flight for one or more individuals” while also bringing “innovations and other benefits to the safety and efficiency of future crews.” 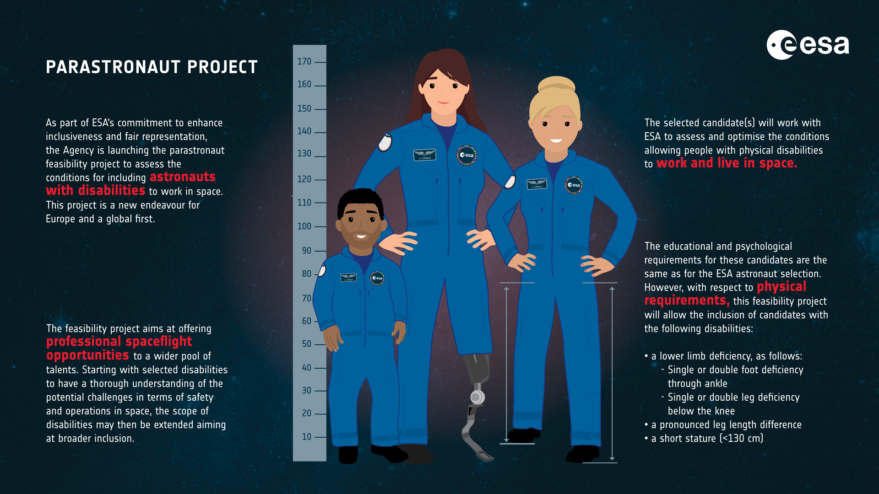 Since its inception, ESA has recruited new astronauts just three times. The first recruitment campaign took place between 1978 and 1979 and the most recent between 2008 and 2009.

Applications for the first phase of the 2021-2022 ESA astronaut selection process will be accepted from March 1 to May 28. Applicants will be required, at minimum, to be a citizen of a ESA member state or associate member state, hold a Master’s degree in natural sciences, medicine, engineering or mathematics, have at least three years professional experience, and speak English fluently.

In addition to the minimum requirements, the agency describes an ideal candidate as an individual that can work well within a multicultural team, spend long stretches of time away from family and friends, undergo vigorous physical training, and stay calm under pressure.

The new class of ESA astronauts will be inducted into the agency’s astronaut corps at one of the most eventful times in its history. In addition to continuing to send astronauts to work and live aboard the International Space Station, ESA’s contributions to NASA’s Artemis program and lunar Gateway space station has enabled the agency to secure seats for the first European astronauts to travel beyond low Earth orbit, seats that could be filled with astronauts recruited over the next two years.

The 2021-2022 ESA astronaut selection process will consist of six stages following initial selections. The process is expected to begin May 28 and conclude with the announcement of the newest ESA astronaut class in the second half of 2022.