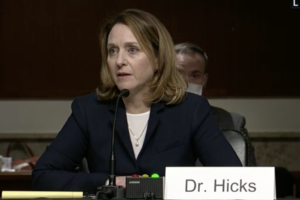 Hicks sat in front of the Senate Armed Services Committee Feb. 2 for a confirmation hearing. She would be the first woman to serve as a Senate-confirmed deputy defense secretary. Hicks was previously vice president of the Center for Strategic and International Studies and served as principal deputy undersecretary of defense for policy during the Obama administration. After Biden was elected, Hicks was named head of the transition team for the Department of Defense.

As deputy secretary, Hicks would have major responsibilities for budget and financial management. At the hearing she was introduced by former defense secretary Robert Gates who praised Hicks for her “mastery of black arts” when she oversaw deep Pentagon budget cuts during the Obama years.

She said DoD needs “inter-organizational collaboration” when it comes to space programs to avoid duplication. If confirmed, she wrote, “I will implement congressional direction to transfer the Space Development Agency to the Space Force, while also maximizing both organizations’ effectiveness.”

Other takeaways from Hicks’ confirmation hearing: