NASA’s Perseverance rover has started moving on the Martian surface as project scientists prepare to send the rover toward the remnants of a river delta in search of signs of past life.
SpaceNews 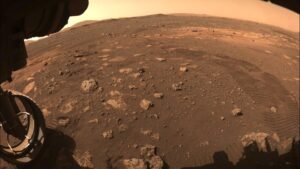 WASHINGTON — NASA’s Perseverance rover has started moving on the Martian surface as project scientists prepare to send the rover toward the remnants of a river delta in search of signs of past life.

At a March 5 press briefing at the Jet Propulsion Laboratory, project officials said that the rover made its first movements since landing in Jezero Crater Feb. 18. The rover moved forward four meters, turned 150 degrees to the left, and then went back 2.5 meters.

“Our first drive went incredibly well,” said Anais Zarifian, Perseverance mobility test bed engineer, at the briefing. During the drive, the rover took images that showed the tracks left by its wheels. “I don’t think I’ve ever been happier to see wheel tracks.”

That first drive by the rover is part of ongoing checkouts of the rover and its suite of instruments. “We haven’t had any hardware issues. Everything has been working that we’ve been checking out,” said Robert Hogg, Perseverance deputy mission manager, at the briefing. “It’s actually been amazingly smooth.”

As engineers test the rover’s systems, scientists are planning the rover’s trek to a delta that is a high priority region for the rover to explore. Katie Stack Morgan, Perseverance deputy project scientist, said at the briefing that they’ve mapped two potential paths from the landing site — which the mission has named Octavia E. Butler Landing after the science-fiction author — to the base of the delta.

“We’re right in the middle of conversations” with rover planners on the best route and how long it will take to get to the delta, she said. That includes weighing the terrain against science that can be done along the way: while one route is relatively smooth, it’s less scientifically interesting than the other route goes past some deposits that offer a preview of the delta.

That trip to the delta will take place after Perseverance deploys Ingenuity, the small helicopter attached to the rover’s undercarriage, and observes a series of flight tests Ingenuity performs scheduled to last 30 days. Hogg said engineers are still scouting for a location to perform those flight tests, using images from the rover.

“We’re still analyzing various areas to determine the best place to do that,” he said. “We hope to get the whole helicopter thing going before spring is over.” Once the flight tests are done, the rover will head toward the delta.

Engineers continue to test some of the rover’s systems, including those that will be used to collect samples. Hogg said commissioning of the sample collection system will be completed after the helicopter tests.

One of the primary goals of the Mars 2020 mission is to cache samples for later return to Earth. With Perseverance safely on the surface, NASA is moving ahead with aspects of future missions needed to return those samples. On March 4, NASA awarded Northrop Grumman a contract worth up to $84.5 million to provide the propulsion for the rocket, called the Mars Ascent Vehicle, that will carry the samples from the surface into Mars orbit. That vehicle will be flown to Mars on a lander mission scheduled for launch no earlier than 2026.

“This is one for the ages for JPL and NASA. We’ve been talking about this for decades,” Hogg said, even though it will still be at least a decade before those samples are back on Earth. “Even though it seems like a long time away, it’s going to pass in a blink of an eye.”